Otrim of Idessa is a noble barbarian, knight, and sage. Called by Queen Philipa and commissioned as lieutenant of the Leonine regiment, he and his band of warriors are off to fight the Korreti infidels. But when conflict over battlefield strategies erupts between the lieutenant and his general, the brutal Ardus Telemachii Atellus, Otrim and his closest friends are accused of treason. Not only must he fight to regain his honor before the Queen, he must fight for his very life if he hopes to save the lives of his men. 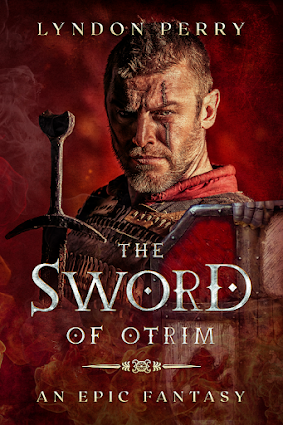 The Sword of Otrim is an epic fantasy novel that taps the spirit of battle and intrigue reminiscent of classic sword and sorcery, but with a spiritual foundation. (Think: Conan the Believer!) Structured as an episodic novel, it is comprised of five short novellas that tie together into one overarching story arc.
Published by Tule Fog Press and available on Amazon.
Contents:
A Promise of Glory
Paeter the Nederlander, a young mercenary searching for glory, is captured by Otrim of Idessa, a fierce warrior who sees something good and honorable in the sell-sword. When the time for battle comes, however, will Paeter prove himself true or will he deny his upbringing and betray his new commander…risking his very soul?

A Trumpet for Battle
Veteran soldier, Terell Mowbray, has vowed to follow his leader, the fearsome barbarian, Otrim of Idessa, "into the bowels of Hades." As the close band of warriors make their way to the enemy city of Korreth on a secret and dangerous mission, his commitment and resolve is tested beyond measure. Will the mighty fighter fulfill his vow to his closest friend? And at what price?


A Lesson in War
Fighting the barbarian hordes for Queen Philipa of Idessa, Otrim - a fierce yet contemplative warrior - hadn't considered that his real enemy might just be his commander. Completing the campaign against the Korreti infidels and returning home victorious is his focus and goal. But when General Ardus Telemachii Atellus challenges him on the battlefield, the bronzed warrior must quickly determine where his ultimate loyalty lies.

Sword of Otrim Novelets
Note: All three of these novelets are included in the complete epic, The Sword of Otrim mentioned above. But if you insist on reading them as stand-alones, you can! Just click on the images below to go to my Book2Read page. Thanks! Also, I have book 2 nearly outlined, so look for it later this year!