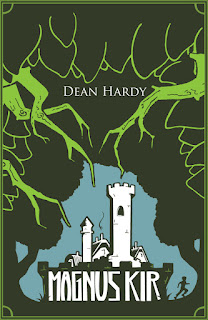 Magnus Kir is a walled city in a wild world. It is ruled by a benevolent, enigmatic king who seeks to protect the people from the dangers without and provide for the citizens within. But young Zack wants to experience more than the safe, predictable life he's been accustomed to. And so the adventure begins.

For the reader, however, the adventure is fairly tame. Zack goes on what amounts to a safe and predictable journey of self-discovery which eventually leads him back to the city he once tried to leave. While there is a bit of suspense as Zack encounters a few strange and mysterious characters (including the lost prince of the kingdom), the overall narrative leaves no doubt as to the final outcome. All's well that ends well.

In this short YA novel, author Dean Hardy leans heavily on the allegorical tradition (sort of a cross between Pilgrim's Progress and The Phantom Tollbooth) and ends up with a fairly solid effort for a first time novelist. The story is okay, especially if you enjoy simple, straightforward tales interlaced with moral truths. While Hardy is over generous with ellipses (a punctuation annoyance) and is a bit wordy (some sentences are redundant), this is a solid choice for your young middle schooler. I rate it a 6 of 10 stars.


~*~
Dean Hardy, Bible Department Chair at Charlotte Christian School in North Carolina, is also the author of Stand Your Ground, an introduction to apologetics for young adults in high school or college. The book includes thirteen chapters that engage the various intellectual challenges that Christian college students face on university campuses. Hardy takes readers on a spiritual and intellectual journey, addressing such issues as the nature of truth and reality, the investigation of other worldviews, the evidence for Christianity, critics' arguments against Christianity, and the relationship between apologetics and evangelism.

Also, read Dean's essay, "The Metaphysics of Magic: Writing Christian Fantasy from a Christian Worldview." And feel free to connect with him at the Magnus Kir Facebook Page.
Posted by Lyn at Sunday, October 23, 2011