Introducing...
The Adventures of Max McCannor

Friend and fellow writer Todd Hunter and I have just released Escape! - the first episode of The Adventures of Max McCannor. It's now available at most of your favorite online bookstores. 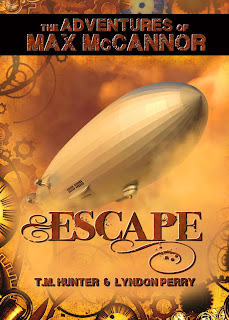 Max McCannor and his friends suffer under the cruelty of their orphanage headmasters, Mr. and Mrs. Tittlesworth. After reaching a breaking point, and spurred on by the hope of finding his long-lost father, Max convinces his best friend Sadie and the others to flee their captors and head west.

But Tittlesworth has too many secrets to keep to risk losing Max and his pals. So the headmaster hires one of his former orphans to track the children down. He wants them returned to the orphanage...before they ESCAPE for good.

Join Max, Sadie, and the rest of the crew as they travel from New York to Chicago and then onward to California in search of his dad, an inventor who has fallen into the hands of a dangerous gang bent on exploiting his mechanical genius.

Escape! is a middle grade/young adult alternative history adventure story set in the 1890s. It has a light steampunk flavor since the era is so ripe with inventions and exciting technological changes. This is the first of three episodes in this particular adventure and Todd and I hope to keep writing more exciting tales featuring Max, Sadie, and their friends.

Ebook (about 80 pages) available for $2.99 at Amazon and B&N and iBooks and Kobo and Smashwords or as a paperback for $8.99 from CreateSpace. Or contact me for a signed copy, $10 includes shipping. Great cover design by Tomomi Ink, btw.

Here's a bit more about the project. Thanks for reading!