At his open call invitation a few years back, a number of us writers jumped at an idea and collaborated with Joe Konrath and collectively wrote a number of stories that featured his spunky female homocide detective, Lt. Jack Daniels, while introducing our own main characters.

My private eye is Ava Jane (AJ) Rakowski, a mentalist of sorts, who is called into assist Daniels and her partner in a series of abductions and murders. I had a blast writing my two stories (Abductions and Beat Down), which Joe edited and added to. He then was kind enough to publish these collaborations and split the royalties with us authors 50/50.

This was actually before Kindle Worlds, but when Amazon launched that initiative, I think most of us agreed to put our stories in KW - and it was wonderful exposure. Over the last few years, I've had a steady (if smallish) income stream hit my bank account each month. Fun times!

Then Kindle Worlds closed. But Konrath, like Hugh Howey (of Wool fame), is an indie writer advocate and very generous with his IP. He encouraged us to re-publish our collaborations on our own. So with Joe's permission, I'm making available (on Amazon for now and then on other platforms like B and N, Kobo, etc.) the two short stories I wrote with him.

Here they are! Hope you enjoy them. (BTW, I wrote them under my pen name, Garth Perry, as they are a bit grittier than my usual speculative fare. Also below is another AJ Rakowski story called Drinking Games. I think you'll like this one too.) 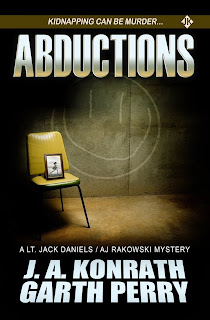 Psychic Investigator AJ Rakowski can't talk to the dead, but she can 'dial' into a dead person's vibes. Why this qualifies her as a consultant for the Chicago Police Department is a mystery to skeptical Homicide Lt. Jack Daniels, who has real cases to solve.

But when Rakowski is brought on to help stop a serial kidnapper from abducting his next victim, Jack is forced to work with AJ. A girl's life is on the line, and maybe if the two learn to accept their differences and join forces, they just might be able to stop the...ABDUCTIONS.

Kidnapping can be murder... 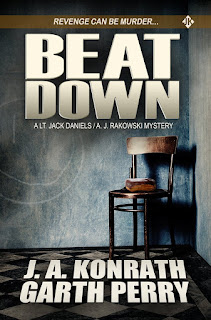 Beat Down
A Jack Daniels/AJ Rakowski Mystery
by J.A. Konrath and Garth Perry

Unfortunately, Ortega is now out of jail because of an apparent clerical error. And when the brutal killings begin it doesn’t take a psychic to connect the dots. The only question is if they’ll find Ortega before he gives his next victim – which happens to be AJ’s best friend Tomen – a brutal BEAT DOWN.

Revenge can be murder...

(Note: Beat Down is a 14,000 word novella (about 60 pages) featuring JA Konrath's heroine Jacqueline "Jack" Daniels who is the star of more than 1 million books, and Garth Perry's new heroine AJ Rakowski. Features action, suspense, and a fair dose of dark humor.) 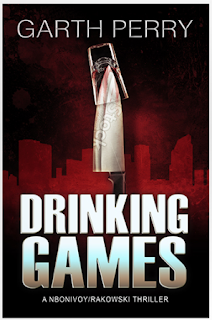