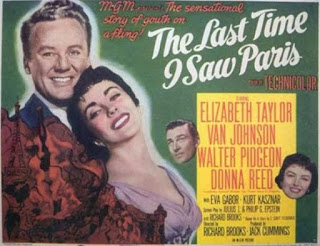 Even with all the streaming services, shows, and movie options available, my wife and I sometimes still can't decide what to watch.
We have about three series we're into right now, but we're not always in the mood for them. (We very seldom binge; yeah, we're weird that way.)
Generally, however, we're up for a classic film from the 1950s or early 60s. One reason is that they are generally safe - no swearing, no sex, no violence. All the things that are supposed to sell today, we'd rather give them a miss. Call us prudes, I don't care.
(Although, I will admit, there seems to be a lot of affairs going on during this era - including the one in the film I'm reviewing below. Which we don't appreciate, but like I said: 'generally safe.')
Anyway, we landed on a 1954 film called The Last Time I Saw Paris. It was free on Prime, which is often one of our deciding factors. It stars Elizabeth Taylor and Van Johnson, with Donna Reed and Walter Pidgeon. Plus Eva Gabor and a young Roger Moore. All nicely cast, I thought.
The plot involves an American journalist (Johnson) who was a liberating soldier in Paris when the war ended. He stays, falls in love and marries (Taylor), they have a child, he tries to become a novelist, gets discouraged, starts drinking more, marriage goes sour... Well, you get the idea.
A common enough story, and competently told, if a bit uneven and meandering in its telling. The scene opens with him returning to Paris, still grieving the loss of his love, whose portait still graces the inside of their favorite café. He wants to reconnect with his little ballerina, his daughter (child actor Sandy Descher).
The story then flashes back to the beginning and skips and stutters forward toward a fairly satisfying ending. We give the movie 4 out of 5 stars. Not one we'll likely watch again, but an entertaining romantic drama with a sly bit of humor, though not a comedy at all. Walter Pidgeon was a hoot.
The director was Richard Brooks who wrote the screenplay and directed Cat on a Hot Tin Roof (1958), also starring the stunning Elizabeth Taylor. We haven't seen that one together yet (I did a lont time ago), so maybe that will be what we watch next.
And before you say anything, no, Cat on a Hot Tin Roof is not one of those generally safe movies! But heh.
What classic films have you seen that you've enjoyed. And why do you like them?
~*~
"Tip a buck, get a book."
(via PayPal.Me - an e-book from Tule Fog Press.)
This blog is reader supported. Thank you for your support!
Posted by Lyn at Monday, January 31, 2022