Watched the first season of Bridgerton on Netflix. We actually enjoyed it. Yes, it’s a modernized “regency romance” (with a multi-ethnic cast playing members of the British ton), but it has a lot of wonderful tension, social maneuvering, and a thread of mystery (just who is Lady Whistledown?).

This first season was based on the first book in the Bridgerton series by Julia Quinn, The Duke and I. The main characters are Daphne (the 4th Bridgerton child, but eldest daughter) who is out in society looking for a marriageable man. Who turns out to be Simon, a friend of the family’s and a new duke.

I thought the cast was great and the comedy of errors and the enemies-turned-lovers trope was well executed. Better than in the book. A few episodes in – being interested in the story – I borrowed The Duke and I e-book from our library…

Got about a third of the way through the novel and it just felt rather bland after watching the series. There are more layers to the show than in the novel. Once we finished streaming season one, I returned to the book, got about half way, and called it good.

Season One on Netflix, 4 stars. Book One, 3 stars (based on the first half).

Now there are some content warnings if you think all the above is an endorsement. Not necessarily recommending this story to others. The book is steamy in places and so is the show.

Yes, there are some sex scenes, but surprisingly, the only nudity is between the married couple (I think, I could be wrong – we fast forward through all that, it’s just too embarrassing to watch).

Oh, and there’s a feminist undertone to the whole show, but it isn’t too on the nose. The series is quite sympathetic to the plight of the female and her inflexible position in society as an object of conquest. Men can be rakes, but women must remain virtuous. The hypocrisy is rightly condemned.

So if you can put up with a little wokeness – and can used the fast forward button – this series might be for you. Season Two comes out next month, March 2022. We’ll probably watch it.

One more point as an aside. While a multi-ethnic cast poses no difficulty for me – it’s fiction, after all – I do find it ironic that the left screams about “ablest” people (whatever that means) playing disabled characters. Or straight people (whatever that means) playing homosexuals. Or White voice actors voicing Indian characters. Et cetera, et cetera.

But! Cast a Black or Asian actor as a White person? No problem. Height of irony, imo. But again, I don’t care who plays who. Shakespeare had men play women in his plays. Thus, due to supply chain issues, I don’t have any more rats' behinds to give. 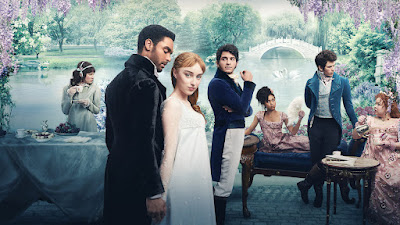 If you’re interested in checking out the rest the book series, here are the Bridgerton novels in order.

Spoilers ahead! (Especially the MC’s of book 4. )

Have you seen Bridgerton yet? What are your thoughts on anything I’ve mentioned above or anything else you want to talk about? If you're not into regency romance, why not? I find it kind of intriguing.