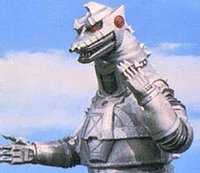 Add your own caption to the final headline below. And then watch for the "Caption Contest Winner" later this week. It could be you! But first . . .

since the early '70s

was looking for Godzilla hiding in Argentina

ANAHEIM, Calif. (AP)
Paul McCartney Sings to Space Station Crew
Cosmonauts join in on 'Back in the USSR'

Now you try it. Give us your best caption.
NEW YORK (Reuters)
Time picks cloned dog as top invention
Your solicited comment here . . .