The question -- and analysts say it is wide open -- is whether consumers bombarded with sound and images want to open their home to yet another screen and put themselves in front of a camera when they answer the phone.

Whether we admit to it or not we are a visual people. Always have been. And this is not necessarily a bad thing. Since recorded history we've been entertained by and communicated via the visual arts - from enacted stories to Greek drama; from wondering minstrels to slapstick vaudeville; from movies and television to internet and vidcasts. 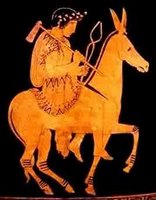 These questions are not new either. We've been wrestling with shameless commercialism since recorded history. After all, didn't you know that Arm & Hammer sponsored Homer's epics? Hello. The story was about the Trojan war after all.