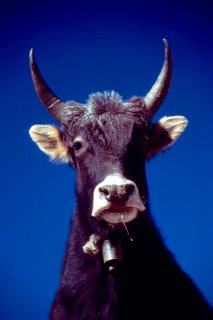 On The Origin of the Species
by the Yak, Special Corresblogdent from Random Yak

"Some are born yaks, some become yaks, and some have yak-ness thrust upon them." With apologies to William Shakespeare - he never spoke a truer (altered) word.

Yaks are capable of accomplishing significant, useful functions. Yaks are strong. Yaks understand the mountain, and what it takes to live there. Yaks are also cranky, stubborn and, at times, dumber than a bag of hammers.

Yaks look far enough down the path to see what's coming. Unfortunately, by the time it gets here, they've generally either forgotten about it or decided to ignore it altogether. You can curse, threaten, cajole, beat, whimper and cry at a yak, but you cannot budge it against its will. As I've previously discussed (back on my side of the mountain) , whether bipedal or quadrupedal, the yak possesses an almost unshakeable inability to recognize either its stubborn, shortsighted nature or its exceptionally limited (often nonexistent) ability to recognize truth and follow constructive advice.

What I haven't discussed is how a two-legged yak gets that way.

Horned and hoofed from the cradle (often to the grave), "born yaks" know nothing different than the sheltered, disconnected (or sometimes just plain bizarre) worldview they hold dear. Hardly surprisingly, they are the least likely to recognize personal error and the most likely to ignore occasional brushes with reality until forced (frequently under circumstances which inspire axioms such as: "there are no atheists in foxholes") to recognize the possibility (however remote) that they might, perhaps, need to bring their understanding into line with reality. As frustrating as it may be to herd such a yak, if you're able to introduce it to reality, you might just find a rational being lurking somewhere beneath the shaggy veneer.

One may "become a yak" for a day, a week, a project or a lifetime. Recently stopped listening to constructive criticism? Shutting down relevant ideas because you're "in charge" and "know better"? Responding to facts and other pesky forms of reality with a snort and a well-inflected grunt? Don't look now, but you're looking a little shaggy 'round the horns. Fortunately, the "yak who became" stands perhaps the best chance of reconnecting with reality and becoming "the yak who was."

Perhaps the most dangerous and least likely to (re)accept reality are those who had yak-ness thrust upon them. Reactionary and often hostile in their refusal to accept "facts," concepts associated with "absolute right and wrong" or "Natural Law" (to say nothing of higher spiritual truth, which is utmost nonsense to a shaggy, bi-legged beast of burden) , these yaks probably started life well-connected with reality, but somewhere along the line one or more worldly influences convinced them to surrender their connection with Truth. Some made the decision in order to "get along," while others wanted things "easy" or favored "personal choice" over absolutes like "right" and "wrong."

Once voluntarily severed, the link to reality "scars over," leaving the yak incapable of admitting error (in part because such an admission requires the yak to admit that he (or she) chose to be wrong). Not content to ignore reality, this variety of yak frequently flees (perhaps not quickly, and certainly without agility) in the opposite direction from both Reality and Truth, in part due to a stubborn refusal to acknowledge "That Which Conflicts With My Chosen Worldview" - even when hard pressed to disclaim the truth of the position from which he (or she) stubbornly flees.

The Moonbat, of course, is "The Yak Who Roared, Sprouted Wings and Flew." But that's a fable for another day. Let's part, for now, with the following thought:

Which will you choose to be today?


(* Note: The Daily Brew attempts to engage ideas and address contemporary themes with truthful and relevant principles for the purpose of positively impacting our culture. Thank you, Yak, for permission to post this original piece at Bloggin' Outloud. For more on the Random Yak and why he blogs, read this.)