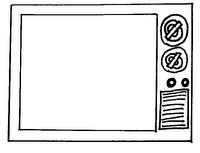 Bravo - the network which feeds us such morally uplifting (::sarcasm::) shows as Queer Eye and Real Housewives - recently aired Three of Hearts: A Postmodern Family, a "documentary" that is designed "to challenge conventional ideas of family." So says the network. I didn't see it.

But I read Chuck Colson's summary at Townhall.com, and the basic gist is that two gay men bring a woman into their lives to be a wife to both and a mother of one of their children (we don't know which one until the end). This "family," to put it bluntly, is screwed up! And the show actually documents the eventual dissolution of this arrangement.

Ironically, the director and her subjects consider this a "political" film striking a blow against defenders of traditional marriage, and legislation like the federal marriage amendment. But if they're really proposing a mess like this as an alternative to traditional families, they are shooting themselves in the foot. The film makes you root for traditional marriage. If these confused people had had more stable families, they might not have grown into the kind of adults who mess up their kids' lives just to prove a point.

Although Bravo aired Three of Hearts earlier this week, it will probably air it again. If it does, this is once when I am going to suggest to you that you watch what is meant as propaganda for "alternative" marriage. Get your friends and family to watch it too, because what they are going to see is what a wreck we make of our lives when we ignore God's plan for marriage and families. And those watching will gain a new understanding of why we must fight to protect and promote marriage.