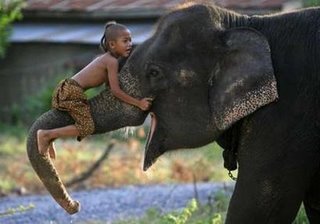 A young mahout plays on the trunk of an elephant
in the ancient Thai capital Ayutthaya.
(REUTERS/Adrees Latif)

Best So Far...
Maniyak: He ain't heavy, he's my brother.
Also found at Yak's: An elephant in need of both a caption and a mahoutectomy.
I was thinking: Who's the real Dumbo?
Fluffy: One of Jolie's children try to take on the GOP.
TWC: OK, Booger, blow! (For alla the Dukes of Hazard and pun-ishment oriented folks out there...)

More Captions at...
Gone Rick Motel
Outside the Beltway
The Right Place
Caption This!