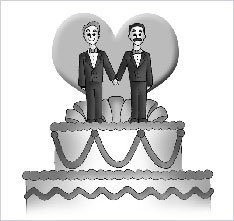 UPDATE: This entry serves as a summary index of links in an ongoing discussion between aTypical Joe and myself, Lyn from Bloggin' Outloud.

Short bit of history. I invited Joe to write about why he supports gay marriage - or as he prefers to call it, "marriage equality" vs. my preferred description, "same gender unions." I would write about why I do not support it.

Why? Because I like arguments. Thus this "diablog," the purpose of which is to understand each other's positions, exact one's own thinking on this topic, and generate further points to consider.

This is not meant to be an end-all, knock-down, drag 'em out fist fight. We want a forum where this issue is discussed openly, and so we encourage participation. Thoughtful comments and civil dialog are always welcome. Joe (ATJ) and I (FBO) will cross-post our entries at each other's blogs so that more people can participate in the discussion.

Past Bloggers Checking In: (With or without their knowledge. lol. NB, if you have a relevant post, trackback here and I'll link to you.)
Brain Cramps for God - Homosexuality Part III - Gay Marriage and Civil Unity
MusingsOn.com - A Conservative Christian Case for Civil Same-Sex Marriage
Mike Adams at Townhall.com - Three Men and a Baby
The Anti-Manichaeist - I'm a little disappointed in Equality Ride
We The People - Another One of Those Lines
Michael Medved at Townhall.com - Gender difference, not gay marriage, at center of family fight
Church and State - Top Seven Myths of Homosexuality
Andrew Sullivan - Gay Marriage