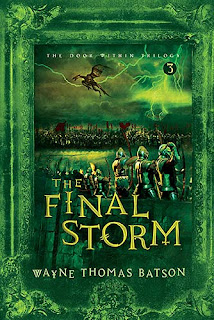 Four authors are featured in this week's tour. Yesterday, Wayne Thomas Batson, author The Final Storm, book #3 of The Door Within Trilogy, popped by to say hi. He graciously developed a graphic banner (see below) that will take you to the tour for more information. You can also view some trailers at his blog, Enter The Door Within.

But first, here's a bit about the series:

Still staggering under Paragor's relentless attacks, Alleble's remaining allies flee from the four corners of The Realm to safety within the Kingdom's walls. Once there they find chaos, the forces of Alleble grieving a fallen hero, and the Kingdom's citizens clinging to an ancient legend about Three Witnesses who can bring victory. But who are they? Where are they?

There is little time for Alleble to mourn before Paragor, the Wyrm Lord, and the deadly Seven Sleepers unite against the followers of King Eliam.

As Alleble begins to lose hope, Paragor unleashes The Final Storm. Will anyone survive to see the dawn?

Sounds like an epic, doesn't it?
For an interview, visit James Somers Blog.
For a review, visit SFFWorld.com.


Get my banner code or create your own banner
Posted by Lyn at Monday, July 02, 2007