One Step Over the Border Blog Tour

It’s a romp...
A road adventure...
It’s a buddy story with romantic comedy!!
Some call it CowboyLit. Rodeo cowboy Hap Bowman’s on a search for Juanita, the gal of his dreams, whom he hasn’t seen in 18 years. He seems stuck on 12-years-old and the enchanting girl he met then.

But Laramie agrees to a final summer’s trek along the Rio Grande. If they don’t find Juanita during those months, Hap promises to drop the idea of the hunt for the mystery senorita. But if they find her, will she feel the same as Hap does about their years ago interlude?

In One Step Over The Border the time tested values of cowboys rub up against contemporary mores. It’s a crazy story that becomes more logical as the reader delves deeper into it. It will make you laugh and shed a tear or two.

Getting back to Hap’s pursuit . . . don’t we all have someone in the past, that we knew for only a short while, that we wish we could have known better, longer? Stephen Bly has! So when Hap and Laramie ventured out on a quest for Hap’s Juanita, Stephen decided to invite others to go along too.

Folks have been e-mailing Hap at hapandlaramie@yahoo.com and asking for their own “Juanita Search Kits.” They get a bumper sticker, magnet, bookmark, stickers, flyers, etc. It’s a whole packet of material that will equip anyone to join the fun of finding the Juanita with “the mark of God.” If they send Hap a picture of the places where they stuck their Juanita signs, they’ll receive a free copy of the book. It’s all there on the website at http://www.onestepovertheborder.com/

And there’s a very special feature on http://www.amazon.com/...some more adventures about Hap and Laramie that did NOT appear in the book, can be found on AmazonShorts in the story entitled, Aim Low, Shoot High. 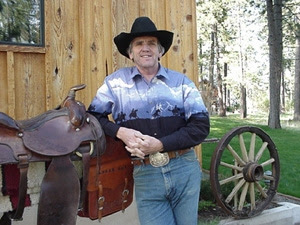 ABOUT THE AUTHOR:
Stephen Bly is a pastor, a mayor, an antique Winchester gun collector and a writer.

He's mayor of a town of 308 in the mountains of Idaho, on the Nez Perce Indian Reservation. In his spare time, he pursues the three R's of ridin', ropin' and rodeo...and construction of Broken Arrow Crossing, a false-front western village near his home.

That keeps him very western. And he collect old Winchester rifles, which reflects his love of historical accuracy. He's also a fan of Jimmy Buffet music.

Stephen says about his writing, "I write about the West (historic or modern) from the inside. Born and raised on western ranches, I have both the heart and mind to describe things as they really were...and are. There are those who think the frontier has long passed and with it the ‘code of the west.’ The truth is, both are still around...and it’s fun to show that in a contemporary story. The West is so big, so diverse, so enchanting it’s a thrill to write about it in any era."

Stephen is the author of ninety-five books and hundreds of articles.
Posted by Lyn at Wednesday, July 18, 2007