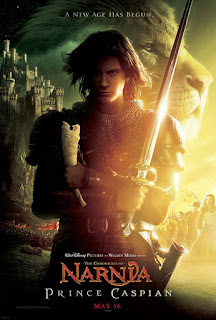 Thank you to Daniel W. Powell for allowing Bloggin' Outloud to post his review of The Chronicles of Narnia - Prince Caspian.

~*~
"A nice diversion." ~ Rated: B-
The summer blockbuster season at the movies has arrived in earnest, and with shrinking purchasing power in a slumping economy, it’ll be interesting to see how the standard bearers will fair at the box office. Iron Man was a pleasant surprise, a sharp entry in the superhero genre that was both well written and well played by its stars. Audiences have turned out in huge numbers, and it should crest the 200 million dollar mark this weekend.

We get Indiana Jones and the Kingdom of the Crystal Skull next week. It’s a film I have high hopes for, and I think a loyal fan base will reward the reunion of Harrison Ford and Steven Spielberg handsomely for their efforts (Ford claims it was one of the most physical turns he’s ever made on the silver screen).

And I’ll be interested to see the returns for this weekend’s big ticket release, The Chronicles of Narnia: Prince Caspian. I’ll preface these comments by saying I enjoyed the first installment in this franchise. Like many critics, I thought the performances at the center of the story lacked…well, emotional range, I suppose. These actors were relatively unknown quantities when they signed on to star in one of Disney’s most anticipated releases in years. I expected a bit more presence—a bit more maturity—on screen in their second go-round.

And for two of them, that was the case. Georgie Henley and Skandar Keynes both seem more comfortable on camera. Henley’s Lucie Pevensie is a nice blend of burgeoning maturity and wistful innocence. She has a couple of solo scenes and carries them off pretty well. Keynes plays King Edmund. He’s not the petulant punk he played in the first film. Here, he’s droll, witty and, ultimately, likable. He delivers his few comedic lines with good timing and doesn’t seem out of his element here.

But Anna Popplewell and William Moseley are still finding their comfort levels. They seem wooden on camera. Popplewell’s Susan waltzes through long stretches of the film as an afterthought. Her culminating (chaste) kiss with Prince Caspian seems perfunctory when it should be emotional. Moseley’s Peter grunts his way through a couple of battle scenes. That’s about the long and short of it for him—and he plays the High King. There should have been much more for him to chew on in this story.

They both have potential and I expect that they’ll continue to grow. But their work here is a bit bland, as are the first two acts of the film itself. The exposition is clunky in the first act, though the effects are fantastic. We learn of the Narnians living in exile and their years of conflict with the Telmarines. None of it should take as long as it does to unfold. And this slow exposition is a particularly glaring aspect of the film because the series it’s often compared to, The Lord of the Rings Trilogy, did such a masterful job in the opening acts.

It finally catches its groove in the third act. Director Andrew Adamson develops the story’s conflict in a fashion that culminates in some solid battle scenes. He uses a series of fly-away shots and sweeping panoramas to ratchet up the tension and illustrate the scope of the destruction in the battle scenes. Audiences will love the Narnians’ military strategy when the Telmarines send the cavalry. Very neat stuff in that sequence.

And the third act goes a long way in redeeming the film. The cinematography here is excellent. It’s a beautiful picture to look at. The effects are great, and if you like minotaurs and centaurs—well, then it’s worth the eight bucks. You’ll be tickled to see the mythical beasts charging the battlefields side-by-side with talking leopards and grizzly bears.

I give this one a B-. It’s a nice diversion, and lots of the families in the packed theater seemed to really enjoy it. But I expected more and I hope the remainder of the films can come close to living up to the masterful vision that C.S. Lewis realized in the books.

Horror writer Daniel W. Powell is a professor of English at Florida Community College at Jacksonville, Florida and the author of the novel Wendigo, currently represented by Baker's Mark Literary Agency. Look for Daniel's short thriller, "Dust Country" in the July issue of ResAliens.
Posted by Lyn at Saturday, May 17, 2008