Lisa T. Bergren is the best-selling, award winning author of over thirty books, with more than 1.5 million copies sold. A former publishing executive, she now splits her time between writing and freelance editing and parenting her three young children with her husband Tim. She lives in Colorado Springs. 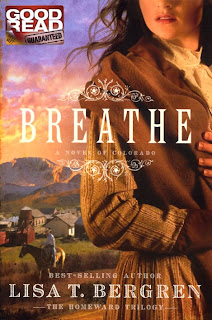 To make a new life, she'll have to learn how to breathe again...

By the time Dominic and Moira St. Clair get their ailing sister, Odessa, to Colorado Springs in the winter of 1883, she is nearly dead. Odessa has been seriously aling for the past year from consumption, an illness that claimed the lives of four of her younger brothers, prompting her father, to send his only surviving children west to chase the cure.

Moira is beautiful and dangerously headstrong; and pugnacious Dominic is charged with establishing a new arm of the family business--a business he doesn't want.
Several days after her arrival, Odessa witnesses what she fears is the murder of miner Sam O’Toole, friend and neighbor to the charming Bryce McAllan.

What’s more, Sam leaves her a poem containing clues that seem to direct her to his mine, which is purported to carry a fantastic vein of silver. But if she is ever to rise from her bed again, she must first concentrate on conquering the giant that threatens her: consumption. Indeed, she must learn to breathe again - daring to embrace her life, her future, and hope in her God.

If you would like to read the first chapter of Breathe, go HERE