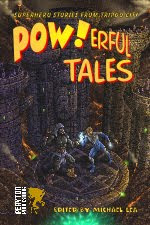 My review of editor Michael Lea's collection of super human fiction, POW!erful Tales, is up at TangentOnline.com. Here's my opening take:

I have to admit at the outset that I’m not a super huge fan of superhuman stories, but I do like well told speculative adventures, which is what this anthology boils down to. And for the most part, the stories contained in POW!erful Tales, edited by Michael C. Lea, are fairly well told fictions featuring superheroes and super villains battling it out in and over Beta City, “the hero capital of the world.”

The setting of Beta City (on the shores of a post-cataclysmic Lake Erie) is important as it serves as a unifying thread for a collection of (for the most part) disparate stories written by thirteen different authors. Lea did a fairly good job tying them together with a running narrative that grouped thematically similar adventures into four sections. He even referred back to some of the characters and situations in his climactic story, “Uncreation Myth.” The overall project was maybe a bit ambitious as the groupings were somewhat forced, but I have to admit it was fresh and creative and did serve to set this anthology apart from the various other hero fiction collections out there.

After a fictional introduction by Lea that seeks to offer the reader some rationale for the increased hero activity in and around Beta City, the dossier is opened and we are invited to judge for ourselves the origins of the sensational happenings as well as the “menaces catalogued” there.

Read my reviews on all 15 stories included in this collection. And if this is your type of lit, then I'd give it a recommended thumbs up, a 6.5 out of 10.
Posted by Lyn at Saturday, December 19, 2009