It Wasn't Rejected, It Was Declined 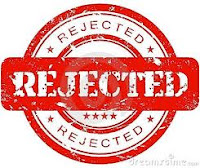 Okay, so maybe it's a matter of semantics. But you have to admit, rejection has such a negative connotation that even saying the word is difficult. It feels personal and permanent. Loser. Unworthy. Reject. See what I mean?

I prefer the word declined. This seems less personal. Passive, in fact. Do you want some more mashed potatoes? No thanks, I'll decline. No big deal. Passing on a good thing for now. You're potatoes were wonderful, Aunt Molly, really. I'm just stuffed. Hear what I'm saying?

That being said, I got my first reje...er, declination of 2012. I felt sad...for a few seconds...for the market that passed on my story! Then I turned around and submitted it to another magazine.

In fact, I was hoping I'd get the inevitable out of the way early in the year. Since Christmas I've sent 7 stories "off to market" and have been sort of waiting for the shoe to drop. Well, the first publication (of many, I'm sure) to decline one of my stories finally came through and we can now put that concern to bed. It's time to wake up and start submitting.

Oh, and remember. Babe Ruth led the league in strikeouts in 1927...the same year he hit 60 home runs.

For discussion: How do you approach so-called rejection?
Posted by Lyn at Sunday, January 08, 2012