Beyond the Veil - A Horror Short 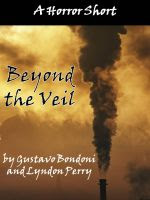 Last year writer Gustavo Bondoni and I collaborated on a short story he'd conceived about a group of humans from all cultures and ages who have learned to survive in the land beyond life. When a new arrival suddenly appears in their living hell, there's only so much one can do to help him adjust to his new surroundings. It doesn't make matters any easier when they encounter a band of undead creatures and a frightening new reality that awaits - something far worse than a second death - "beyond the veil."

This story is free at Smashwords and available in all ebook formats. It originally appeared at Fear and Trembling Magazine, June 2011, an online zine of spiritual horror which I edit and publish.

Gustavo Bondoni was born in Argentina, which makes him one of the few Argentinean fiction writers publishing primarily in English. He moved to the US at the age of three, then, because of his father's work, bounced around Europe and the rest of the world every few years. He made it back to Buenos Aires at the age of twelve, by which time he says he was not quite an American kid, not quite a European kid, and definitely not Argentinean!

His fiction spans the range from science fiction to mainstream stories, passing through sword & sorcery and magic realism along the way, and has been published in five countries and four languages to date. You can read his journal here.

You'll also want to catch the review by Fred Warren of Gustavo's collection of short fiction, Tenth Orbit and Other Faraway Places. Thanks, Gustavo, for allowing me to publish our story again for a broader readership!
Posted by Lyn at Sunday, July 22, 2012