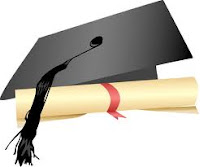 A few years ago I earned my second BA, this time in English Literature. Going back to college after a twenty year break was loads of fun - especially as I received straight "A"s this time around. (grin) One reason I think I did so well was because I like to read and write. And English Lit is all about reading and writing. Evidently, I've had some time to practice my critical writing skills since my first go round at school (either that or this second college was a lot easier!).

At any rate, most of my courses tackled a number of books; and most profs required some sort of analysis. I have to admit that I used google to research a bit here and there - to see what types of resources were out there, right? ;) But my papers and words were mine, of course.

After I wrote my essays, though, I thought it would be a kick to see if other students would search out my essays and comment. Well, no one is commenting, but someone has been major clicking on three or four essays these past few years. I find it weird and gratifying, I suppose, that my 3 All-Time Top Posts are based on the following books that I read and reflected on in 2009.

Another popular post is my take on Shakespeare's Coriolanus. I wrote this reflection in 2009 but didn't post it until last year for some reason.

If you aren't aware of these titles, I'm not surprised. They aren't current best sellers, but they do regularly find their way onto college syllabi throughout America. Anyway, I wonder what makes these posts so popular - and if those who click on them are actually reading the essay? citing it? plagiarizing it? Or are they're just teasing me with all those clicks.

Hey, random 'pocho'/'surrounded by mcnickle'/'emperor was divine' search string lurker, next time leave me a comment.