I've never considered myself a "binge" reader (someone who finds new authors and then quickly reads through their backlists) but I have found myself enjoying a few serial novellas as of late. Here's what I'm reading. Tell me what series you're serious about lately

and Friends In Deed

. The third novel is out and I hear author T. M. Hunter is writing the fourth book in the series. Also, if you're into short stories, check out Dead or Alive - An Aston West Collection

. This anthology of stories is published, ahem, by ResAliens Press (that would be me ;-) and is top notch, if I do say so myself. I didn't publish the novels, but definitely recommend them. Can't wait for the next book! 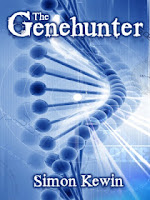 . British author Simon Kewin has hit upon a cyber-punk crime-noir techno-future thriller of a series that could be the next big indie publishing sensation since Hugh Howey's Wool. (I say that just in case it is, so you heard it here first - but I actually believe it too!) Kewin's 5-part series (now in an omnibus for $2.99 - or a reasonable 99 cents per installment) is fast-paced, well-written, and fantastically creative. Check out my reviews of #1 and #2 and #3 on Goodreads. I'll get to #4 and #5 ASAP. Now I do have to say, this series is more geared for adults (in terms of theme and language, whereas Aston West is more PG'ish), but it's a definite recommend.

series. Hooke offers this teaser: 3740 A.D. The ice age has immobilized the world. Colossal walls seal off the cities from the uninhabitable Outside. Humanlike entities called “gols” run society, and force the humans to wear collars that block the innate powers humankind has evolved. One man rises up...

This is a science fiction fantasy story that promises an epic telling. I've read the first episode and am intrigued enough to buy part 2. Plus I've met Mr. Hooke on Twitter and we're having a great time bouncing around the Top 20 Amazon Short Story category together. :)

And finally, well not finally, because my Kindle is full of books and series and shorts, but for now, the other series I'm checking out is Zachary Bonelli's Voyage

series, an expansive collection of stories that spans numerous episodes, collections, and series. I've read #1 and #2 and #3 and posted my thoughts on Goodreads. It's bit different than what I'm used to, but the writing is solid and the story concept is unique. I wish Bonelli well as he releases more episodes.

Well, that's it for now. What series (whether novella collections or traditional novel series) are you into right now? What authors are you checking out? Any new recommendations for those closet binge readers (like me) out there?