Brand New from Muse Publishing!
A future noir detective thriller at about 100 pages.
Only $2.99 - Immaterial Evidence by Milo James Fowler 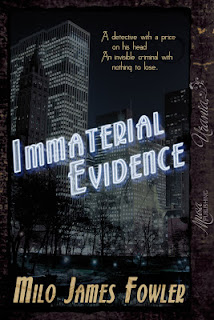 A detective with a price on his head. An invisible criminal with nothing to lose...

The vault door never opened. The bank went into lockdown in less than a minute. Yet the security footage was unmistakable: a hundred silver bars had simply vanished.

Ever since the city’s most dangerous crime boss put a price on his head, private investigator Charlie Madison has lived as an exile in Little Tokyo. But now an old friend and police sergeant has lured Madison back into the city to hunt down an invisible criminal—if he can.

As Madison makes his clandestine return, high-profile people start disappearing. And when federal agents swoop onto the scene to take matters into their own hands, they offer Madison a deal he can't refuse—as long as he agrees to work with them. With Japanese freedom fighters and refurbished killing machines threatening to take the world to the brink of nuclear holocaust, the United World government needs all the help it can get.

Embroiled in an unimaginable mystery, one private eye must rely on his wits to solve a case where the evidence is immaterial, and the odds are stacked high against him at every turn

About the Writer: Milo James Fowler is a teacher by day and a speculative fictioneer by night. His work has appeared in more than 60 publications, including AE Science Fiction, Cosmos, and Shimmer. A San Diego native, Milo currently resides on the Pacific coast with his beloved wife, and when he's not grading papers, he's imagining what the world might be like in a few dozen alternate realities. For more books, visit his Amazon Author Page.
Posted by Lyn at Friday, May 31, 2013