Free short thriller (blurb below) available Wednesday, September 25 from Amazon - Drinking Games. (Back to 99 cents on Thursday.) This story is about 45 pages and features my two detective protags, Ned Nbonivoy and AJ Rakowski. Check it out. Let me know what you think.

So here's how this relates to my "10 Day 1/2 Novel Challenge." I'm writing a Ned Nbonivoy novel (made very little progress, today, btw, that's my Day 4 update). Ned's a PI in Detroit. But I'm also incorporating a "franchise" character into the novel in the hopes that it will be accepted by a popular indie writer into his series of thrillers.

What's cool is that a tie-in story featuring my psychic detective AJ Rakowski has already been accepted by this indie writer and features his franchise homicide detective. So, as convoluted as this sounds, my short story below is tied to both the story that will be published soon by said unnamed thriller writer as well as the novel I'm writing which I hope will be published by said unnamed thriller writer. Clear as mud? Anyway, once they're all published, buy 'em all and it'll make sense. :) Happy reading!

PI Ned Nbonivoy is stuck on a case he can't seem to solve. That's because he's up against a sinister psychopathic killer whose hobby is to bestow random acts of havoc on as many people as possible, leaving too many clues and rabbit trails to track down. Ned needs someone who can help him focus. AJ Rakowski is just the kind of mentalist who can help. 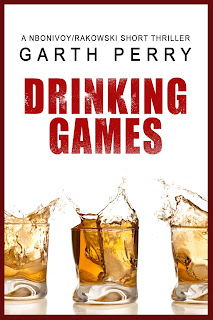 Note: This short thriller is 13,000 words which translates to about 45 pages. (It's not a novel). It's available for free on Wednesday, September 25 for one day only at Amazon and only 99 cents otherwise, just in case you missed this promo. (BTW, this is a PG-13ish themed story, thus my "pen name" as "Lyndon Perry" writes SF, fantasy, and less gritty material. ;)
Posted by Lyn at Tuesday, September 24, 2013