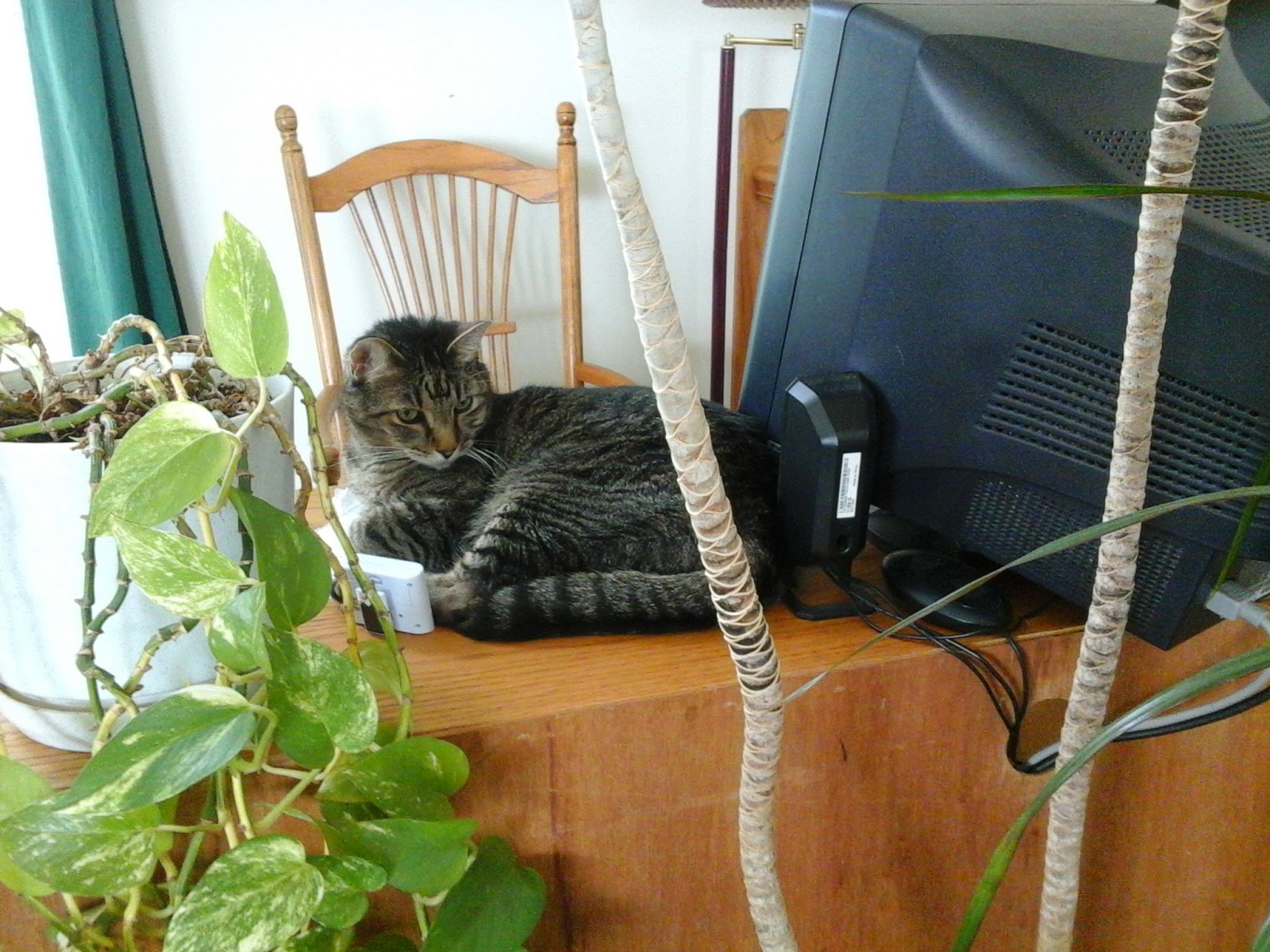 First, this is Izzy, my inspiration for Mack the Magical Cat. Izzy, er, Mack is one of the main characters in my first novel, Ma Tutt's Donut Hut, a curious cozy mystery. It's on sale through the weekend at Amazon for $1.75. Check it out here.

Then, there's my first interview! Well, maybe not my very very first, but one that feels like a "real" interview since the topic is my first novel. Visit Jeff Chapman's writing blog to read it.

Of course, I'm having a blast finding my way in this promotion game. Now that I've started writing with the serious intention of making this my full time career, I'm actually doing some tentative marketing. Discount price. Blog tour. Get my friends to pimp my book (thanks everyone!). Yeah, I know, not very sophisticated and all very old school (like my CRT monitor for my non-internet writing computer pictured above, hello, '90s calling). But it's what I can do for now.

What else can I do? Write more stories while thanking each of you for your support. I've already heard from a number of you about wanting more "Ma Tutt" - so your wish is my command. Here's an opening teaser for the first chapter/story in my next novel. If, after you read it, you want to receive the whole "tail" and become a beta reader (guidelines to be a second reader here), I'd be happy to send it to you. Probably 8,000 words (20 pages) total when completed. My email is somewhere on the right. Let me know. Meanwhile, enjoy!

First Love ‘Tail’ – “Yesterday”
The mountain air had a slight chill to it when Dolly and Martía met at the back door of the bakery at just after four in the morning. It was the 4th of July. Ma Tutt’s Donut Hut opened at five o’clock sharp, and she had her prep time down to forty-five minutes.
“Good morning, Ma,” Martía said, yawning. She gave her matronly friend a hug. “I’m glad we decided to do most of our kitchen work before leaving for the day. Those three-thirty baking sessions were starting to wear mighty thin.”
Dolores Tutt chuckled. “Don’t you know, the older we get, the less sleep we need! At your age, you should be able to function on just a two or three hour nap.” Ma winked at her ‘younger’ friend, sharing an inside joke.
Martía Cooper was one hundred years old but didn’t look a day past twenty-four. That’s the age she and her husband Rohan stopped growing old, for some mysterious reason. The Coopers were Gypsies and Dolly, though privy to their secret, still mostly chalked the strange and wondrous happenings that surrounded them to their intriguing Romany background.
Including the presence of Mack, a very intriguing feline in his own right.
The gray Mackerel had come with the Hut when Dolly purchased the building six months before. Due to the pronounced M on the tabby’s forehead, Dolly christened him Mack. He was called Tozier, however, in a previous life when he belonged to the Coopers—as much as a cat can belong to anyone. And he, too, was quite advanced in years, having just celebrated his sixtieth birthday. But these tales have already been told.
Dolly, for the most part, simply accepted the mystery of it all.
Mack greeted the two women with a surly mrrow as they entered the kitchen and hit the lights.

Thanks for reading! And like I said, let me know if you want to beta read the whole story. Maybe you found something in this opening scene that didn't work for you. Maybe you found a typo. Maybe you're just nosy and need to find out before everyone else what catastrophe Mack got Ma into now. Email me for more info and thanks for your interest and support.
Posted by Lyn at Thursday, July 10, 2014