I Love Lucy - Being the Ricardos 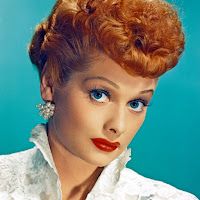 I remember the I Love Lucy show - not the original run in the 1950s but a few (mumble) years after that when it was in syndication. Super popular show back then. Still is, for those who like to watch classic TV.

(BTW, here's an extensive history of Lucille Ball's background and popularity. Quite an indepth look at the show and her acting career prior.)

So when I heard about Being the Ricardos coming to Prime, I thought we'd give it a shot. Knew nothing about the production of the movie - what it was about or whether it was supposed to be accurate or anything.

Just decided to watch it without any preconceptions.

Initial reaction - it wasn't bad. Generally enjoyed it. It was done in a fictional documentary style, telling the story of a particular 'hell week' where Lucy and Desi are confronted with her past. No spoilers, but that part, at least, was based on actual events. Very interesting backstory.

The only person who came close to resembling an original cast member was Arianda. Kidman did a good job as an actor but did not remind me of Lucy at all. Neither did Bardem as Desi. Simmons was fine as always but didn't ring true as "Fred." Maybe I was expecting too much of the original show - the real life people back then were pretending, after all.

Aaron Sorkin (writer, producer of The West Wing) wrote and directed the film and I liked the pseudo-documentary approach. It was clever and the flashbacks filled in a lot of details. Except they weren't clear that Lucy and Desi already had a child, young Lucie, which was confusing because of Lucy's announcement of being pregnant, which I thought was her first pregnancy, but no...)

Anyway, the main theme (which might be stated: 'There's no place like home.') was a bit heavy handed, imo. And the humor, while biting and ever-present, wasn't particularly funny. Maybe that was by design - the movie clearly depicted when I Love Lucy was on screen, it was hilarious, but off screen everyone was almost all work and no play, no chemistry.

Which led to the bittersweet ending - Lucy is vindicated, but never finds her 'home'. This turns the film into something of a hybrid between a comedy and tragedy. Maybe that reflected the real life situation of Lucy and Desi who divorced soon after their last show together.

Conclusion: give it a shot if you're interested in this bit of pop culture nostalgia. Nothing too objectionable, some vulgar language and a super brief love scene. Rated R, I think. I give it a 6 or 7 out of 10? Let me know what you think in the comments below. Spoilers are fine.

~*~
"Tip a buck, get a book."
(via PayPal.Me - an e-book from Tule Fog Press.)
This blog is reader supported. Thank you for your support!