I’ve got a couple of streaks going. I’m blogging every day, even if it’s something silly like posting my reading challenge from Goodreads. (winky face)

And I’m reading a book a week.

Last year I read about 2 books a week, but I wanted to cut down so I could write more. Well, I’ve cut down but I haven’t written more. Yet. Hopefully, that will change in the next few weeks.

All that to say, here are the four books I’ve read in January, with some comments. 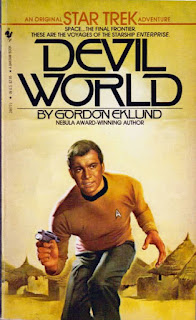 A very mediocre Star Trek adventure with eye-rolling moments and beloved characters that just did not ring true. Competent writing (Ecklund tied up all the loose threads), but the whole scenario just didn't hold water. A quarantined planet - where the colonists went mad - but the Federation doesn't have any further details? And Kirk declaring his love for someone he just met? Lust, yes; love, no. (And his declaration of love wasn't due to any onset of madness.)

So 2 stars. Definitely not as snappy as the television show, which is why I read these early ST adventures. I want to get back in that universe for nostalgia's sake. This one did not take me back in a positive way. Avid fans of these Bantam offerings will likely have to read it but probably won't like it.

Very enjoyable mystery with a Jewish flair. I picked this one up for a dime at the local DAV and then later saw online that a friend was reading it. He gave it 4 stars, I’ll give it 5. Wasn’t perfect, but was fun and kept me guessing, and the final reveal was a bit of a misdirection but still logical.

A bit of a puzzle detective story, some mild thriller elements, and an interesting nod to Talmudic law, religious practices, and cultural interactions in the suburbs of Boston in the mid-1960s. Nice time capsule of a story.

This is a prepper/post-disaster novel and for whatever reason, I really enjoy this genre. It’s book one in Craven’s ‘Still Surviving’ 5-novel series. I give it 4 stars. Not as good as Franklin Horton's Borrowed World books (of which I've only read 2) but pretty well told with a focus on character interactions, moonshine prep and production, and a growing conflict. I like Wes and his family.

My main quibble is that the promised showdown between Wes and his antagonist didn’t happen. And so the story arc felt unfinished as this book ended with a shocking revelation that will obviously be explored in book two. Series books always leave something for the next volume, but this initial installment didn’t quite wrap up in a satisfactory manner. For me, at least. Overall, good writing, though.

Four. Whetstone:Amateur Magazine of Sword and Sorcery Issue One (Spring 2020)

The issues are free to download and the publisher wants folks to spread the word. They have a FB page and twitter presence, so follow along if you enjoy old style, pulpy S&S adventures. (The cover art gets better with every issue, btw. Not sure about the stories, as I’ve only read the first issue so far. Already downloaded the other 3 via Google Drive for later reading.)

The Wizard's Demise (Reilly) is a Battle of the Ages story, but really an evolution of one hero-type to the next. Queslavalaka (Toner) excellent depiction of battle-lust and the result. The Temple of Vanas (Judge) is also good – a temple/priestess intrigue. As Repellant as I (Folmar) is dark and despairing, as it should be. Undying Thirst for Vengeance (Ritzlin) is a cautionary tale. Kauahoa and the Tattooed Bandit (Baker), a south pacific fantasy, different and intriguing.  A Thousand Words for Death (Íñiguez) also dark and despairing. Totem and Stone (Clark) is a tribal tale of black magic. The Price (Shaw) pits two titans against one another. And The Stranger's Payment (Samant) has a nice set-up and twist; a solid concluding story.

Currently reading a bunch of other books (in a wide variety of genres), which means in February I’ll likely have more than four to report on! Dang. I need to cut down so I can write more! Oh well. Look for my reviews of the following in about a month or friend me on Goodreads.

~*~
"Tip a buck, get a book."
(via PayPal.Me - an e-book from Tule Fog Press.)
This blog is reader supported. Thank you for your support!
Find me on Facebook where I post nerdy memes and share about my writing projects.
Posted by Lyn at Saturday, January 29, 2022