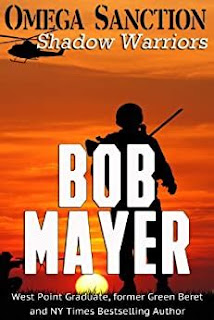 Omega Sanction is book 4 (of 5) in Bob Mayer's Shadow Warrior series (previously/alternatively known as Black Ops series). Mayer is a former Green Beret, so his special ops thrillers immerse you in realistic, historical settings and situations. This book, first published in 1999, puts us in the Bosnian War of the early 90s, with international players, kidnappings, nerve gas, espionage, a grand cover-up, and inter-agency betrayal. All good stuff.

Good writing, as well, but on the grisly side at times. My suggestion is to skip the first chapter. A psychopathic adult rapes a 16 year old girl and brutally murders her, all in gory detail. This opening serves as a prologue of sorts, so just know that two psychos meet up in an abandoned castle in Germany and plan something nefarious. Then start with chapter 2. I've read Mayer before and don't recall him writing anything as brutal as this. Skip the intro.

The rest of the story unfolds rapidly. Main character Thorpe has a friend, Dublowski, who's daughter goes missing in Germany. With some early cyber-sleuthing (not too outdated, actually, just ignore the modem references, lol) and with some connections higher up the chain, Thorpe heads to Europe to uncover the mystery. It's a race against time and in the end, the bad guys get what's coming to them (resolving as all good thrillers should). But the final chapters were a bit rushed and the loose ends didn't tie off completely, in my opinion. So 3.5 stars for me.

Still, if you're an international thriller fan, this series will likely satisfy. Mayer has over 80 books published and successfully made the transition from a mid- to top-list writer (traditionally published but not a mega bestseller), to an indie or hybrid author who is now very successful. Despite the rough start to the novel, this shaped up to be a pretty good special ops / cyber thriller. If you like Brad Thor or Vince Flynn, you'll probably like Bob Mayer.