Review of Naked in Death by J. D. Robb 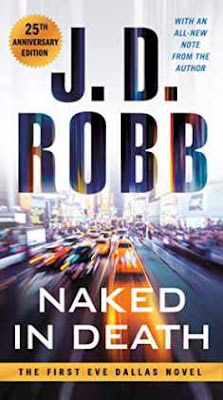 This is the first Eve Dallas novel I've read. My first Nora Roberts/JD Robb novel I've read. Generally positive impression overall - her writing is more than solid, of course. And she's proficient with omniscient (POV)! The edition I had was the paperback, 25th anniversary edition. Crazy that she now has over 50 in the series!

Naked in Death had a strong opening and premise, and half way through I thought this first futuristic 'in death' novel was pretty good. Yes, it's a bit grisly and gory and raw and over-sexed and over-the-top in places (so I skimmed quite a bit), but the plotting kept me reading.

Until the last third of the book when it became clear that - SPOILER if you haven't read this first one - the self-righteous hypocrite politician was the 'bad guy.' So this bit of anti-conservativism straw man trope just soured me on the rest of the story. Plus a pretty cliché ending, imo.

Also, Eve's love interest, Rourke, is just not likeable. I'm sorry, but he exhibits all the rape behavior that the theme of the book argues against. Maybe Roberts/Robb doesn't see it because she focuses too much on her sexcapades every 50 pages or so, but the man in this story is not cool, at least in book 1. I've heard they get better after the first 5 or 6, so I may jump ahead and sample more in the future, but maybe not.

Oh, one more thing. The series takes place in 2050s or something, so near future. This one was written in the 1990s and it's kinda funny to see what we thought would be super cool future technology coming just around the corner. But the ubiquitous use of computer disks was certainly a miss, lol. Not faulting the author, none of us can see into the future very well. 3 Stars.

Are you a J. D. Robb fan? What do you like about this series? What do you hate? Feel free to comment below and confirm or disagree.
Posted by Lyn at Thursday, March 10, 2022