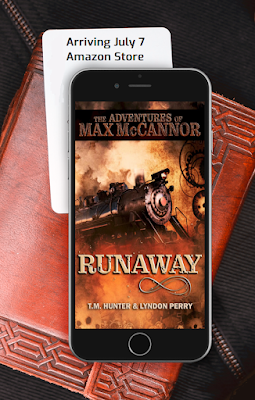 My friend T. M. Hunter and I wrote the first episode of The Adventures of Max McCannor a few years ago. It's titled Escape! and it features a young teen named Max who escapes with his friends from an orphanage in 1890s New York City.

It's a middle grade steampunk adventure. The quest is to find Max's long-lost father, who has been taken captive by a sinister mastermind. Max's dad is a genius inventor and has to create a revolutionary mining machine for his captors.

We just uploaded episode two, Runaway! to Amazon. Ebook is only 99 cents, and a paperback is available as well. We were excited to continue the exciting story as the former orphans head west in search of Max's father.

How we collaborate is that we'll each take a turn writing a chapter and advancing the story. We'll then each read and edit the other's chapter and push forward based on an agreed upon outline. Plot points change all the time, but we generally know where we're headed.

And let me tell you, the adventure and excitement is building. Our young crew of heroes are on their way north to Alaska in the midst of a gold rush. Will they find and rescue Max's dad before the winter strorms hit? Find out later this fall when we complete the third installment, Eureka!