I won the lottery! 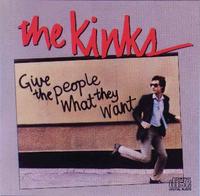 I've never played, but I just won 6 bucks. Had I played - or actually bought the tickets myself - I would have spent $20 to win $6. Not that exciting considering.

Here's what happened. I hadn't called into a radio station since forever to request a song. So I was listening to 104.5 The Fox (a classic rock station - yes, I'm that old) and decided to request the Kinks' Give the People What They Want. (Image from Dave Emlin's Unnofficial Kinks Web Site)

So after I made my request the guy tells me I'm a winner. I say thanks, I know. He says, no you actually won something. I said, really, what? He said some lottery tickets. I said, great. And so that's how I came to win the lottery. They gave me 20 bucks worth of tickets, we scratched them all off and won 6 dollars.