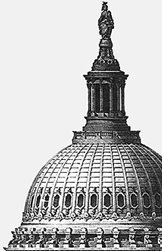 In the light of the Abramoff scandal, there are many calls for reform. However, rather than making things better, it will as many past reforms have done, make things worse.

For example, John McCain and the Campaign Finance Reformers told us that there was too much money in politics, and this was the reason behind the McCain-Feingold legislation. However, what they did not eliminate was the NEED for money.

There are two reforms that I believe are vital to making sure Congress works better.

You Get What You Pay For

Congressmen earn $162,100 per year which is a jaw-dropping figure for most Americans. Indeed many self-styled government reformers propose Congressional Pay as a good cash cow to slay. As good as it might feel to stick it to Congress, even if you made the Congressman position itself a volunteer position, it would save a mere $87.6 million in Salary, which would do nothing about our debt or deficit.

While $162,100 may be a great salary for most of us, it’s a job many people can't afford to take, particularly with Congress' ethical restrictions on outside income. Consider a successful Lawyer or an Executive whose bringing home hundreds of thousands a year. In running for Congress, they must stop earning money for the time they're running they're campaign, and once elected they'll have their income cut while having to maintain a 2nd residence (be that an apartment or a home in the DC area.)

You want better Congressman, up the pay to Half a Million per year. In doing so, you'll get more people who are able to run AND you'll also end one source of special interest corruption. Many members of Congress after they retire become lobbyists. As lobbyists, they earn more than they could ever hope to as Congressmen. Of course, they've got to be friendly to industry while in office, if they want a shot at the job. By raising Congressional Salary, K Street will become less attractive.

Also, I think Congress needs incentive pay, just like the CEOs of big corporations get. If a Congress can balance the budget without using Social Security, I think every member should get a million dollar tax-free bonus. I'd support smaller bonuses to get it down, like give them $50,000 to get it down to $200 billion and $100,000 to get it down to $100 billion. If it leads to real reductions in the deficit or our national debt, it'd be money well-spent.

The issue here is how can the US government attract more quality employees to these Congressional seats. The answer is by paying more and providing incentives for the type of behaviors we want.

As I mentioned before, money is needed in politics like never before. If you want to limit the influence pedaling in Washington, one key thing you can do is scrap our counterproductive campaign finance laws.

Candidates spend hours upon hours hobnobbing with big money people, sending out fundraising letters and trying to scrape together enough $2,000 donations to run a campaign.

This doesn't eliminate the influence of money in politics, it enhances it, and makes Congressmen the slaves of hundreds of special interests.

What I advocate is eliminating all corporate and labor union contributions, along with PACs and having individuals contribute whatever they want to a campaign, as long as the donation's fully disclosed.

In doing so, we'll reduce congressional fundraising time, as well as the power of special interests to control hundreds of congressmen. We'll also open up the process to candidates who may not be able to get fundraising connections, but can get some start up money from a sympathetic benefactor.

Of course, there may be attempts to buy Congressmen, but with full disclosure, large contributions will be a news item so we'll know who exactly is financing a candidate.

It may be counterintuitive, but its what will work and that's what our Country should be focused on.

(* Note: The Daily Brew attempts to engage ideas and address contemporary themes with truthful and relevant principles for the purpose of positively impacting our culture. Thank you, Adam, for permission to post this original piece at Bloggin' Outloud. For more on who Adam is and why he blogs, read this.)