What the Dickens Hornblower Contest

Bird keeper Darren Jordan comes face-to-face with a Von Der Deckens hornbill as he takes notes during the annual stock-take at London Zoo, Regents Park in London January 13, 2006. The yearly head count is a legally binding register of over six hundred species housed at the zoo, many of which are highly endangered. (Source: REUTERS/Toby Melville) 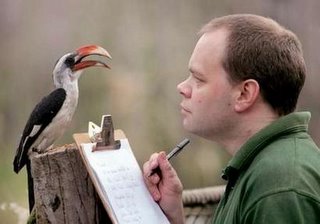 Yeah, yeah. Blah, blah, blah. Can you give me a better caption?
Winners announced next Thursday, January 26, 2006.
(I'm on a weekly cycle now - Thursday to Thursday, so there.)

Winners (01.26.06) ...
BirdTalk Catagory
1) DaveD: Yeah, I don't see getting a break here so a little lunch would be great. How about some millet, cracked corn and some grubs. Oh, could you freshen up the water pan while you're here?
2) Gwynne: While I've got you here, could we talk about my release date?
3) Beth: Any family history of beak problems? Out of season molting?

PolitiSquawk Catagory
1) Dane: Hornbill ~ "Yeah I talk alot. But with the brain the size of a walnut my options are limited. I mean what could I do except maybe head the DNC?"
Jordon ~ "Oh you couldn't do that. You're over-quaified"
2) Maggie: UN officials are carefully tracking the Avian flu - once again demonstrating how truly efficient an organization they are.
3) Rodney: "Yes I want a nose job, do you happen to have the name of Michael Jackson's cosmetic surgeon?"