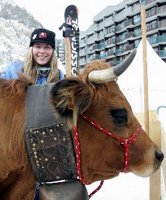 A commercial airing frequently during the Olympics attempts to define a hero. Images of Olympic athletes flash across the screen as a child's voice offers some of the attributes of a hero.

"A hero has super powers."

"A hero can do things no one else can do."

Well, I've watched (and blogged) a lot of Olympic athletes since the Torino games opened earlier this month, and I've got something to add on the topic of heroes.

Being an athlete doesn't make you a hero, any more than sitting on a bun makes you a sandwich. But some athletes - at least, some I've seen at these games - do inspire in a way that offers at least a minimal connection.

A hero doesn't have to have super powers. A hero uses the powers he (or she) has to the best of his ability, despite the consequences of - and the odds against - victory. To know what is right - and to do it in the face of adversity - defines a person of honor - in some senses and contexts, a hero.

A hero doesn't have to be able to fly. But a hero (Lindsey Kildow - United States) stands up after a devastating fall - sometimes even one that left her in the hospital - and skis another run.

A hero doesn't have to be the youngest, or - by many measures - the strongest. A hero (Michaela Dorfmeister - Austria) proves you can still win, even when you're one of the oldest on the course.

A hero (Enrico Fabriz - Italy) wins the bronze medal, the first in his country's history, and isn't afraid to cry at the finish line - or to keep trying and turn the bronze into a golden finish the following week.

A hero can do things - but they shouldn't be things no one else can do. A hero should also be someone who does things everyone can do, but most people don't - or won't.

It's easy to explain away your third place finish, your failure to achieve. It's easy to offer up excuses for why you just couldn't make the grade. It's hard to get up early, to work and train and persevere on the chance that when the moment comes, you'll be faster, higher, stronger than you've ever been before - some days, maybe even strong enough to win, but other days just being strong enough to stay the course. Sometimes it's nearly impossible to keep going, when the odds aren't just stacked against you - they're so far off your name doesn't even show on the board.

But that's what heroes do. Those who persevere to the end are the ones who will be saved - not by victory, but by the just reward due a good and faithful servant.

Some take home shiny medals along the way. Many more do not.

Some - like the ones I mentioned above - win public praise for their perseverence. Most of us do not.

I doubt most people know the name of Argentine skier Miriam Vasquez, who finished 39th in the women's downhill. Few blogs have sung the praises of Patrick Antaki of Lebanon, who finished 27th in the men's skeleton. But to the people of Argentina and Lebanon, not known for supremacy at the Olympic games, the fact that they showed up and competed likely makes them heroes. They didn't give up and go home just because they weren't likely to win.

It's giving up that makes you a loser. Giving up - or giving in. Knowing what is right - objectively right and objectively good - and turning away or letting go because doing the right thing just seems too hard at the moment.

(* Note: The Daily Brew attempts to engage ideas and address contemporary themes with truthful and relevant principles for the purpose of positively impacting our culture.)

Picture Source: Lindsey Kildow with a cow, not a yak. Today's Brew also percolating at Basil's Backup Blog, Don Surber, Conservative Cat, NIF, and others as I serve it up.
Posted by Lyn at Friday, February 24, 2006