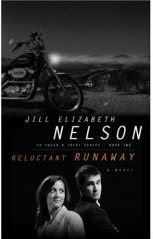 Reluctant Runaway
by Jill Elizabeth Nelson
Multnomah, March 2007
Book #2 in the To Catch a Thief Series

A Life or Death Game of Connect-the-Dots

Why did Karen Webb abandon her husband and newborn baby? Is it coincidence that she disappeared just one day after irreplaceable Anasazi Indian artifacts were stolen from the University of New Mexico Museum of Art and Anthropology? When Boston-based security consultant Desiree Jacobs is called to the scene, her FBI agent boyfriend, Tony Lucano, warns her not to play amateur sleuth. When he joins her in Albuquerque on the copyrighted property pirating case that he’s assigned to, it becomes obvious that their cases are connected. And the popular media ministry, The Inner Witness, has more than a little something to do with them. Desi and Tony are scrambling to connect the dots and figure out how Karen fits into the picture - if it's not too late to save her. When the horrifying truth comes to light, can they even save themselves?

Author Jill Elizabeth Nelson is a member of the Christian Fiction Blog Alliance (CFBA). Her blog, Artistic Blogger, addresses issues about art, art theft, antiquities preservation, and the art of fiction writing. She takes art seriously - when she's not having fun with it, that is. The To Catch a Thief Series combines her love of the written word with her love of other art forms.

The first in the series was Reluctant Burglar, second is Reluctant Runaway. In January 2008, she will reveal the third book, Reluctant Smuggler. Jill is thrilled if the adventures that spill from her imagination can raise awareness about art theft - deemed "a looming criminal enterprise" by the FBI. Jill and her husband, Doug, have four children and live in Minnesota.

(Note: I haven't read this book. I'm participating in a blog tour. For more information, visit the CFBA.)
Posted by Lyn at Wednesday, June 20, 2007