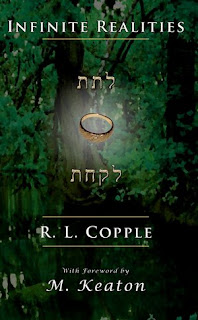 Infinite Realities is a novella sized collection of fantasy tales – 5 short stories in about 85 pages, plus a bonus commentary on the relationship between faith and fiction. It can be read in an evening; and if you know you're immersing yourself into a series of morality tales with hints of allegory, one setting will be enough. Not that it's overkill. The pieces are well told and fast paced, and the author has provided the reader with some interesting scenarios to consider as well as a few adequately developed characters (for this short of a project). However, the message-oriented nature of this book is best contemplated as a whole.

The intended audience is Christian (or anyone comfortable with the Judeo-Christian milieu); but the fantastical elements and plot lines, while painted in fairly primary colors, do allow the five stories to stand on their own and thus could appeal to general fantasy fans. I might have appreciated a more subtle approach (more pastels) to the various "realities" I encountered while journeying with Sisko, our protagonist, but again, for the novella length, I think the book accomplished its purpose.

And that purpose? To assist the reader, Every Man or Every Woman (via Sisko), to experience and learn from the many stages, or realities, of life. Copple isn't trying to duplicate the grand scale of Pilgrim in his progress "toward no earthly destination" (Bunyan), but he does capture with simple "clarity and a gentle sincerity" (from the Introduction by M. Keaton) that human yearning to be more than what we are.

It starts with a calling. In "Steamy Realities" Sisko discovers his true yearning which is to become a healer of the human family; indeed, to become his brother's keeper. With a magical ring inscribed in Hebrew with the words, "It is more blessed to give than to receive" (words of Jesus), Sisko leaves the Steam House (reminiscent of an aboriginal sweat lodge) with a vision to pursue and the power to fulfill it.

While on this journey, Sisko encounters currents from within and from without of jealousy and power ("Undesired Realities"); inadequacy vs. duty and revenge vs. forgiveness ("Unknown Realities"); the power of love and mercy ("Unseen Realities"); and failure, repentance, and destiny ("Ultimate Realities"). One gets the impression that these themes could go on ad infinitum, and that would be correct, thus the title. Yet the handful of issues explored here are representative and adequate enough for the reader to put down the volume with satisfaction.

For a small press release (Doubled-Edged Publishing) the quality is fine, with only a few typos and formatting slips. The front cover is very well done, and the writing, as mentioned, is competent but not stirring. As a Christian, I found the bonus column on the interplay between faith and fiction to be a most cogent and intelligently argued apologetic for why fantasy literature is not merely to be tolerated within Christian circles but celebrated and pursued. This may not be of interest to those who don't share that faith perspective, but it is still a hotly debated topic among believers. For this reason alone, I'd recommend Infinite Realities for not only its contemplative offerings but for simple fun and enjoyment.