The Surrounded by D'Arcy McNickle 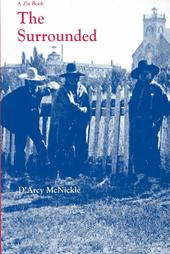 The Surrounded by D'Arcy McNickle.

Written in 1936 this novel tells the story of Archilde, a young Native American man caught in the clash of cultures typical of early reservation life. Although I read it in a college literature course, the reading level and content are appropriate for any high school language arts class.

Here's a portion of my essay that I wrote for class:

In D’Arcy McNickle’s novel The Surrounded the protagonist Archilde Leon is a conflicted character. Through a series of events – some predictable in their consequences, and some a result of unforeseen circumstances – Archilde finds himself in a terrible place by novel’s end.

His problems throughout the story stem largely from his reactions to the real and perceived expectations of his family and friends, cultural norms, and the authority figures he interacts with and how Archilde attempts to deny or fulfill them. What I think we’ll discover as we examine a few of these expectations is that our protagonist, like the reader of McNickle’s insightful novel, is at times both hero and victim; he both rises above his circumstances as well as succumbs to them.

Archilde Leon is the son of a Spanish rancher and an American Indian mother who reside on the Flathead Indian Reservation in Montana. This sets the stage for plenty of family conflict since the father, Max Leon, is a hard man and impatient with his Indian wife and children whom he perceives to be lazy and ungrateful. So from his birth Archilde is a product of a conflicted heritage.

Set (and written) in the 1930s, the location and era also evokes a time of prejudice and paternalism against Native Americans by the ruling ‘white man,’ represented by the Bureau of Indian Affairs which oversees reservation life. Archilde is a product of this conflict of cultures as well. After his education at a federal Indian boarding school, he leaves the reservation and his family, presumably to find himself and develop his own identity.

The story opens as Archilde returns from Portland, Oregon, where he made a passable living playing his fiddle in a show house. While he admits some success out there in the real world, something is evidently missing in his soul and he returns home to get a taste of his former life.

He looked toward the mountains in the east, and then upward to the fleckless sky. Nowhere in the world, he imagined, was there a sky of such depth and freshness. He wanted never to forget it, wherever he might be in times to come. Yes, wherever he might be! (McNickle 5)

But he realizes immediately that his life had changed. The narrator reminds us, “When you came home to your Indian mother you had to remember that it was a different world.” (McNickle 3) It seems, like many of us who have been away from home yet long for a connection with our past, Archilde wanted to renew his familial and cultural ties. Ultimately, however, he desired to leave the reservation for bigger things.

Yet upon his return, his mother, Catharine, expected him to remain at home. For, “An Indian boy, she thought, belonged with his people.” (McNickle 2) So Archilde decides to extend his stay a few weeks – which turns into months – since Catharine seems to be of ill health and lonely. At first this is a laudable decision but he slowly loses sight of a driving vision for his life.

Which is the complaint of his father. Max Leon is bitter that none of his sons – “Seven sons, they might have been seven dogs!” (McNickle 26) – made anything of themselves. Or more accurately, they didn’t join him in running the ranch. Instead, they all left to go “back to the blanket” (McNickle 25) - a derisive racial slur. In Max’s mind it’s either the lazy reservation Indian or the hardworking ranching Spaniard. And while Archilde is neither lazy nor ungrateful, he does not want to take up the yoke of running the ranch. He responds to his father’s dual expectations in anger and frustration.

Eventually Max is sensitized to Archilde’s conflicted emotions by his old friend Father Grepilloux. So Max encourages his son to talk to the priest about using his musical talent within the context of reservation life. After meeting with Archilde, Father Grepilloux is ecstatic. He believes he has found an Indian of sufficient talent and motivation to serve as a kind of saving representative of the Indian people. Here at last is a shining product of the religious and cultural assimilative process (that had failed when applied to previous generations, but never mind that)!

One can imagine the pressure that Archilde felt to fulfill such a role, even though much of Father Grepilloux’s hopes remained unspoken. So for the sort term, since he is interested in music Archilde does accept the priest’s offer to continue his training. This seems to be a worthy response, but again, Archilde soon loses steam as it’s not a decision that flows out of a life purpose but is rather a reaction to someone else’s expectations.

And so the story proceeds. It's a well written narrative, moves fairly quickly, and has a number of intriguing and fascinating characters, customs, and history to it, but it doesn't seem to get bogged down or lost in its central purpose of showing the internal conflict of the characters being worked out on the external stage.

From these limited examples we’ve seen in Archilde a person much like ourselves. We have interests, hopes, goals, and aspirations. And we often gravitate toward experiences that foster our dreams, as did Archilde. When responding to these various expectations, Archilde considered his life interests, responded in a way that seemed to move that direction, but then ultimately let the circumstances of life dictate his destiny. This is often our story as well.

But in this novel, Archilde’s pattern of timidity and uncertainty eventually result in a desperate situation. I won't spoil the plot, but there is murder involved. And, although innocent of the crime he is accused of, Archilde has so often let others’ expectations decide his fate that unless he takes control of his destiny when the novel ends, he will pay for those expectations with his life.
Posted by Lyn at Thursday, June 25, 2009