When The Emperor Was Divine

Just finished When The Emperor Was Divine by Julie Otsuka. Her style is a bit minimalist, but she offers some keen cultural and historical insights via an engaging narrative. Good for a high school language arts class. I read it for an American Multicultural Lit college course and wrote the essay below about one of the characters in the story. (I got an A but I can not guarantee that's what you'll get if you plagiarize :-) 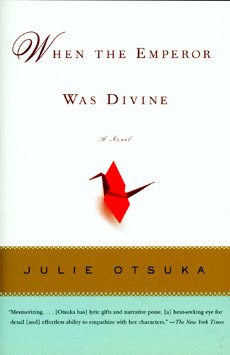 "Saying Goodbye to the Emperor"

The perspective of the young boy in Julie Otsuka’s novel, When The Emperor Was Divine, is a defining lens through which the reader can understand and experience this powerfully emotional narrative. His is one of five points of view that serve as chapters in this somewhat minimalist book about one Japanese family’s experience in an internment camp during World War II. The boy’s story is the central chapter from which the novel takes its name and recounts the loss of innocence that often accompanies difficult experiences or life transitions. In this story of struggle and survival, the boy is saying goodbye to his childhood, even his heritage, yet without an assurance that something better is waiting for him once the journey ends.

As the young boy’s narrative begins, he and his mother and sister are already in the camp behind barbed-wire fences, housed in tar-paper barracks: “It was 1942. Utah. Late summer.” (Otsuka 49) His father had been taken away months prior and the boy, naturally enough, expected to be reunited with him upon their family’s arrival at the holding facility. Confused at being separated from his dad, but harboring childlike hope, he “thought he saw his father everywhere.” (49) His expectations, however, were dashed repeatedly which led to a solemn grief that he wasn’t able to express. His older sister understood and she nudged him, somewhat cruelly, toward the cold truth when she stated directly that their papa was gone. (50)

In the absence of his protective provider, the realities of his situation eventually dawn on him. He realizes how little they have left. Their family is stripped of everything but the bare essentials, which include “three iron cots and a potbellied stove.” (50) Not only does he lose his possessions, his mother instructs him to “never say the Emperor’s name out loud.” (52) Refusing to lose all sense of identity, the boy sometimes whispers it anyway.

Then there is the dust. He and his mother and sister are in the desert; it is hot, and the perpetual dust finds its way into what little he does own. At one point the boy writes his name in the sand, but by morning the wind has blown it away. (64) Little by little he is losing himself and the drudgery of internment existence is taking over. He waits for the bells before meal times. He waits for the mail and the slim chance of hearing from his papa. He longs for the six o’clock dinner hour in his old neighborhood where in his mind he sees America as it should be – where “fathers with shiny black briefcases [burst] through front doors, shouting, ‘Honey, I’m home!’” (66)

His sense of dislocation is further aggravated when rumors sweep through the camp about what might happen to them. They might be sterilized, stripped of their citizenship, “taken out onto the high seas and then shot,” (70) or left to die on a desert island. The boy doesn’t know if he will stay or go from this camp, or whether he’ll see his father again. Still, he writes to his papa in order to stay connected to reality. Sadly he, like his sister, can’t always remember what their father’s face looked like. He tells her, “It was sort of round.” (72)

Life in the internment camp eventually settles into a workable, if not enjoyable, routine to which the boy adjusts. There was school. There was the pledge of allegiance. There were the reciting of lessons and the playing of games. There was also news about the war. The months pass. The boy could almost believe he was living something close to a normal life.

Then winter came and added another set of difficulties to life in the Japanese internment camp. The cold seeped into the barracks and wouldn’t let go; they were assigned only two army blankets per person. (92) It snowed and then rained, but “the alkaline earth could not absorb any water” (77) so there was mud everywhere. The school was shut down. Outbreaks of flu and diarrhea spread through the camp. His mother got depressed and became ill. The boy’s old life started slipping away “like a dream he could not quite remember.” (93)

Despite the various struggles, the boy never gave up hope of seeing his father again. He imagined the day they would be reunited: “He’d rest his head on his father’s shoulder and smell the dust and the sweat and the faint smell of Burma Shave and everything would be very nice.” (105) This vision helped him survive and gave him strength to face the many painful days in the camp.

After the war, the boy is indeed reunited with his father. However, life will never be the same. His father returns broken, and so does the boy to a lesser degree. He is no longer a child. During the internment he not only says goodbye to his childhood, but loses the innocent trust that a child has in governing powers. He’ll adjust, though – he did in the camp. Yet the scars will remain as memories.
Posted by Lyn at Wednesday, May 27, 2009