Robin Parrish had two great ambitions in his life: to have a family, and to be a published novelist. In March of 2005, he proposed to his future wife the same week he signed his first book contract with Bethany House Publishers. They contracted him for the rights to not only that first book, Relentless -- but two sequels including Fearless and Merciless. A trilogy that unfolded in the consecutive summers of 2006, 2007, and 2008.

Robin Parrish is a journalist who's written about pop culture for more than a decade. Currently he serves as Senior Editor at XZOOSIA.com, a community portal that fuses social networking with magazine-style features about entertainment and culture. He and his wife, Karen and son live in North Carolina. 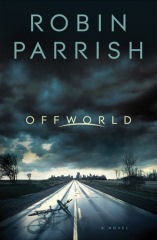 "Every Person on This Planet Has Disappeared."

Commander Christopher Burke and his crew are humanity's greatest explorers. They've finished their mission on the red dirt of Mars and now they just want to get back to Earth. To see friends, family, and loved ones. To be home. But even with communication to ground control cut and a perilous landing, nothing could prepare the crew for what they discover when they step foot back on planet Earth.

It's not a dream. It's not a trick. Now Burke and his team have one mission:find out who or what is behind the disappearance of all mankind.

If you would like to read the first chapter of Offworld, go here.

I'll review Offworld tomorrow, but if you want to win a free copy of the book, go here!
Posted by Lyn at Monday, July 27, 2009