Spring, Finally - At Every Day Poets

A friend at SFReader - von Darkmoor, in fact - recently posted his reflection on the statue "Death of the Last Centaur." It's funny, because I participated in this same challenge a couple years ago and just had part of my sketch published in Every Day Poets. Here's the visual prompt... 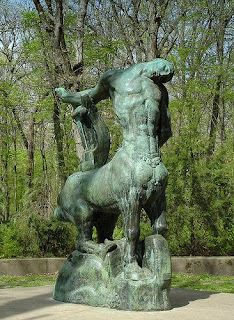 ... from which I based the following opening scene. Start by reading the opening scene to this opening scene at Every Day Poets (in prose poem form, titled "Spring, Finally"). Then come back and read the rest, the title for the whole narrative being "The Sorrow of Raetheos."

All but the Centaur Raetheos — Light of God — who arrives alone and with a quizzical countenance, having traversed the valley in vain search for his paramour and partner Celeste, a superior beauty among the superior creatures. They were to meet at the fountainhead in the mountain pass the day following the Chickadee’s inaugural song; when the spring’s water breaks free of winter’s icy grasp and gushes once more toward the valley floor.

Raetheos had lingered beside the spring an additional sun’s rising and setting, waving on those excited companions who were returning to their seasonal home, inviting him to join them, assuring him that Celeste would surely be waiting, as their friends were, for him below. But the Centaur knew these were but sympathetic words, without thought or knowledge of their covenant to enter gaily together as Lord and Lady of the Vale.

As Raetheos ponders this unforeseen happenstance, a creature who rarely announces its presence and is as rarely acknowledged, creeps its way to the Centaur and coils itself before the mighty beast. “O Light of God,” the Serpent breathes, “your humble servant is ever before you to honor your will and carry out your commands. I am but a willing instrument in your…”

“Yes, yes,” Raetheos responds, pounding his hooves impatiently, inching his powerful and imposing forelegs forward, threatening to crush whatever lay in his path. The Serpent, content in its despised role and accustomed to such maneuvers, confidently certain that no harm will come its way, seems to bow in obeisance and continues.

“My lord, I bring you word from beyond the mountain pass concerning the Daughter of Stars which might interest you, as I am well aware of your...”

“Enough! What of Celeste, what of my bride? Speak quickly or that long-throated, unholy tongue of yours will cease to conjure another spoken word.”

The Serpent nods and speaks, although without urgency and with feigned concern. “It is with great sadness that I must announce to you that your fair and honorable beloved has fallen in a brutal and vicious attack, an ambush of such a nature that no one is left to tell of its details. I happened upon the deathly scene within a day or two of its occurrence, too late to render aid, and the only service I know to provide is that of a herald, albeit one that is reluctant to proffer his message.”

At this the great Centaur cries out in an anguished shout that echoes throughout the valley, interrupting the ignorant levity and bliss of the rest of the animals caught up in spring’s celebration. Raetheos demands that the Serpent disseminate the exact location, time, and any further details concerning the circumstances of Celeste’s demise. Upon extracting everything pertinent from the ill-received messenger, Raetheos gathers a band of trusted advisors and friends and sets out to determine the veracity of his soul mate’s fate.

They arrive upon the scene and it is as was described by the Serpent—the stiff and pale body of the Centaur slashed through and splayed upon a dark and muddy patch of ground; a lifeless mass that, without the privilege of foreknowledge of who lies before him, is unrecognizable to Raetheos. The compatriots silently gather around the body, circling their hearts against the fear and grief they know must come, but shielding, for now, the immediate shock of despair.

The land is deserted except for patches of snow and the lingering of winter’s shade that slowly reaches out to blanket the forlorn assembly in one last act of cruelty. The funeral drizzle returns in brief defiance of the changing seasons, but for Raetheos, it could well be forever.