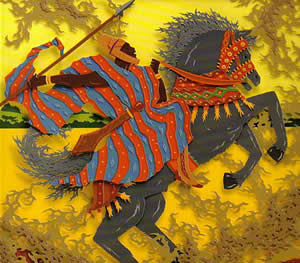 Sunjata is a 14th century epic lay from West Africa that recounts the events and legends surrounding the life of Sunjata, the 13th century king of the Mali empire and of the Mande people. It is an involved and communal tale full of myth and folklore told by a griot, or cultural bard. The role of the griot is not only to relate the happenings of their particular subject (in this case, the Mande king), but to shape the message in such a way as to highlight truths and mores appropriate for a specific occasion. Each telling, then, is a unique rendition of the epic poem performed – with music, verse, and commentary – in concert with a listening audience.

Intended as an oral piece, Sunjata is therefore somewhat difficult for the uninitiated to read and comprehend in written form. In fact, there are a number of different “versions” of Sunjata, often times conflicting in their details, due to the varied settings of the story. The particular source used for this discussion is the version told by the griot Bamba Suso and translated by Gordon Innes in 1974. (Bedford 26 – 47).

Despite the unfamiliarity of the form and the occasional aspect of this piece, an observant reader will quickly find cross cultural points of contact within the text. Many of the myths, characters, and symbols of Sunjata crop up throughout ancient literature. As has been noted by scholars for centuries, there seem to be certain archetypes that are part of the DNA of our psyche, if you will; symbols that cross cultures, language groups, and generations. While griot Bamba Suso may bring forth Africa-specific applications, and touch on certain life lessons that we as western Euro-Americans find a bit tricky to understand or appreciate, he nevertheless is working with a number of universal symbols that most of us can identify and identify with.

Space will not permit a thorough investigation into every archetype within the saga, but a sampling should suffice to demonstrate its cross cultural message. As has been stated, Sunjata concerns the remarkable, even magical, life of the king of Mali, who history tells us defeated a rival king, Sumanguru, and consolidated the Mande tribes to form an empire centered in Timbuktu. (20, 21) The prediction of Sunjata’s birth and his coming of age tales – and eventual deeds of greatness – are the first to echo a common motif from other epics and narratives. The divinely appointed leader, like Moses or David in the Bible, is an archetype many of us will recognize. Indeed, the “great reversal” theme (where the greatest leader arises from the lowest of positions) is found in the opening lines about Sunjata’s father responding to the prediction of a soothsayer: “If you go to Sankarang Madiba Konte and find a wife there, she will give birth to a child who will become king of the black people.”(lines 29 – 32) But after interviewing nine potential wives, the soothsayers still hadn’t discovered the right one. “Now, is there not another Sukulung?” … “There is, but she is ugly. She is my daughter.” … A soothsayer consulted the omens and then told him, “This is the one.” (lines 40 – 45) Like the shepherd boy David who grew into the greatest king of Israel, Sunjata’s humble origins will give way to an appointment with destiny.

Moreover, like King David, Sunjata assembles a group of loyal followers – in this case, griots – who defend his cause as he learns to become a great warrior. In a dramatic show of solidarity with one of his griots, Sunjata cuts off some of the meat in his calf for food so his friend will not starve. (lines 441 – 475) This brings to mind the “body and blood” of Christ eaten in a symbolic way even today by Christ’s followers to demonstrate their unity with their Savior. The idea of having a “blood brother” (a friendship that is as strong or stronger than family ties) is also found in Native American spirituality.

Another biblical allusion is in the details of the defeat of his final foe, Sumanguru. A common story element in the tale of overcoming an enemy is the discovery of some secret strength that is then used to expose the foe’s weakness (or Achilles’ heel, a la Homer’s Iliad and Odyssey). Sumanguru, like the biblical Samson, harbors a secret to his success as a warrior. And like Samson who tells his secret to Delilah, Sunjata’s sister discovers Sumanguru’s source of power. (lines 680 – 682) This information is used in the end to defeat Sumanguru, thus making Sunjata the unrivaled king of the Mande people.

As with many folk tales, there are story elements in Sunjata that are included to explain the origins of various tribal customs or cultural traditions. They don’t seem to have anything in particular to do with the epic itself, but are used by the griot in order to share valuable lessons with those assembled. Because modern readers may be unfamiliar with the oral tradition of African storytelling, the actual reading of the text may be a bit tedious at first. The version told by Bamba Suso is repetitive at times, seems to head off on a few tangents, and includes a number of allusions to tribal myths and historical events that the casual reader would miss or find confusing. But if one reads the text with an eye for broader themes, Sunjata will reveal some cross cultural symbols that most will recognize. This epic lay is an interesting exploration of how different cultures utilize similar themes and archetypes to communicate that which is most important to them.

(Note: This short essay was for a college class. If you plagiarize I can not be responsible for your grade. :-)
Posted by Lyn at Friday, September 11, 2009