Note: I received this book out of the blue (with no press release or note of explanation) from Zondervan Publishing, presumably to review.
UPDATE May 13, 2010: I Now realize that this is part of the Christian Fiction Blog Alliance Book Tour.
Since this isn't quite my genre, I gave it to a friend - who has read a couple "prairie romance" novels, although admittedly not her favorite genre either - and she provided the following review. Thanks, Mysti! 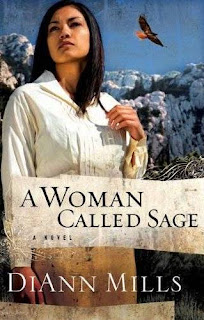 A Woman Called Sage
by DiAnn Mills
Reviewed by Mysti.

Sage Morrow is half white, have Ute, and a self-proclaimed wild child. The story opens with Sage, a love-struck wife and mother-to-be, lost in the eyes of her husband. Romance abounds. Then tragedy! After gun shots ring out, we're fast-forwarded to a moment in time where we meet Sage as a hardened bounty hunter. The transition is jarring and unbelievable.

We're told that after spending several years learning the ways of the Ute with her Native American people, she sets out to seek justice for her husband's and unborn child's deaths. But the reality is, she's out for revenge. Sage has forsaken God, her parents values, and everything womanly about her. How, then, does she expect to succeed? On her own, one outlaw at a time, apparently.

Being a bounty hunter, her job is to bring in some of the worst criminals around - and we're expected to believe that she is still beautiful, still full of life, and still able to function in regular society. In a time of all out racism against the Indians, in a period that holds little respect for women, Sage is paraded across the pages like a pageant queen saving the world.

The other main characters aren't much better. A sheriff with a wayward brother, a brothel cook that seeks to deter the "girls" from working, and a few Christian ladies full of lace and sunshine make up this unbelievable cast. Although I rather appreciated the fire and brimstone preacher and all his bluster, even he takes a fantastical turn from reality in the last chapters.

A Woman Called Sage is a book full of romance and violence - and not a scrap of believability to be found in it. Although this is marketed as a Christian novel, I question the message the author is sending to those who are new in the faith. Sage is separated by God and is fully consumed with vengeance, but in the last chapters she has a hot flash that is portrayed as God touching her. I strongly caution against this use of "touch and feel" as a sign from God just when the moment requires it. Many Christian novels are used as icebreakers into Christian conversations with new believers and I wouldn't want someone to be turned off by a fictional miracle experience that doesn't mirror reality.

If you are a reader that can completely immerse yourself in a story, suspend your disbelief, not worry about period consistency or about the logic of human nature (or all the laws of nature, for that matter), then this novel might be for you. But if you find yourself getting hung up on that telephone pole in the distance in an old western movie, put this book back on the shelf.
###
Wow! Thanks, Mysti, for giving me the low down on this book. But you can decide for yourself, obviously. Here's the official blurb from the publisher:

They took away everything she loved … now, she’s out for revenge. Sage Morrow had it all: life on a beautiful Colorado ranch, a husband who adored her, and a baby on the way. Until five ruthless gunmen rode up to their ranch and changed her life forever.

Now Sage is a bounty hunter bent on retribution. Accompanied only by her majestic hawk, she travels throughout the Rocky Mountains in search of injustice, determined to stamp it out wherever it’s found. The stakes are raised when two young boys are kidnapped and Sage is forced to work with Marshall Parker Timmons to rescue them. But Sage may ultimately get more than she bargained for. In this exciting historical romance set in the late 1800s, murder, intrigue, kidnapping, and questions of faith will keep you in suspense until the final pages.

Award-winning author, DiAnn Mills, launched her career in 1998 with the publication of her first book. Currently she has over forty books in print and has sold more than a million copies.

DiAnn believes her readers should “Expect an Adventure.” DiAnn Mills is a fiction writer who combines an adventuresome spirit with unforgettable characters to create action-packed novels.

Six of her anthologies have appeared on the CBA Best Seller List. Three of her books have won the distinction of Best Historical of the Year by Heartsong Presents. Five of her books have won placements through American Christian Fiction Writer’s Book of the Year Awards 2003 – 2007, and she is the recipient of the Inspirational Reader’s Choice award for 2005 and 2007. She was a Christy Awards finalist in 2008.

DiAnn is a founding board member for American Christian Fiction Writers, a member of Inspirational Writers Alive, Romance Writers of America’s Faith, Hope and Love, and Advanced Writers and Speakers Association. She speaks to various groups and teaches writing workshops around the country. DiAnn is also a mentor for Jerry B. Jenkins Christian Writer’s Guild.

She lives in sunny Houston, Texas. DiAnn and her husband have four adult sons and are active members of Metropolitan Baptist Church.

You can also read an "interview" the author has with Sage! DiAnn Mills' interactions here will definitely give you a feel for her writing style, as will this list of books she's published. Like I said, not my cup of tea, but this type of fast-paced, airplane/beach/bathtub reading might be right up your alley.

The book will be released next week, but in the mean time, here are a few other reviews I've found.

* Mary Lou Cheatham for The Examiner.com

* CFBA participant, A Fiction-Filled Life Blog, has a good review and interview with the author. Check it out.