The Icarus Hunt by Timothy Zahn 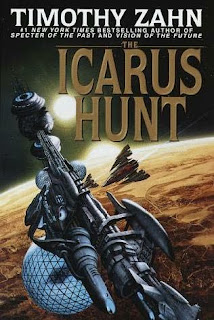 A brother of mine turned me on to SF writer Timothy Zahn (the author of a number of Star Wars novels as well as the Conquerors' Trilogy and Dragonback series). My introduction to Zahn came via The Icarus Hunt

- a fun and fast-paced space opera jaunt through the galaxy. I thoroughly enjoyed the engaging characters, witty dialog and repartee, as well as the adventure laden plot (that reads like an Agatha Christie in space along with the requisite locked room mystery and Poirot-like denouement). Good, clean fun (with a few minor swear words and PG situations) - a solid book in which to introduce the genre to your junior higher! Don't let the 450 pages deter you either, quest/adventure novels have come a long way since Don Quixote.

Zahn is a talented writer with an imagination that spices up the standard space opera trope with just the right amount (imo) of hard SF detail. The Icarus is a spaceship that is carrying an unknown cargo that could break the economic stranglehold of the Patth, an alien civilization that controls a majority of the commercial space lanes. Enter Captain Jordan McKell who is hired to pilot the Icarus to Earth - and along the way unravels a number of mysteries that spring up regarding this special cargo. The book is a page-turner as McKell jumps through space from one crisis to the next.

I enjoy Zahn's first person narrative voice (via a Han Solo-esque protagonist); he nicely integrates dialog and action, weaving in the world-building and background information through POV reflection and conversation. If there is a quibble, it would be that his characters "grimace" too often. It's a descriptive word, but is almost as frequently used as "said" for a dialog marker. (I've noticed in the two other books I've read by Zahn that grimacing must be one of his writerly peccadillos.) Still, I can live with that since it doesn't take away from the story, and eventually one just ignores those markers.

That said, if you're looking for an escape while on spring break or at the beach this summer, grab The Icarus Hunt