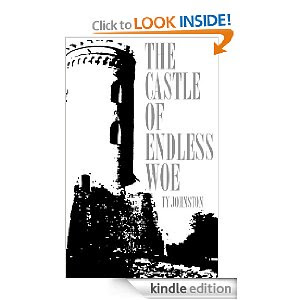 The Castle of Endless Woe
by Ty Johnston

This is a solid novelette set in the same world as the author's epic fantasy trilogies known collectively as The Ursian Chronicles. The setting of this story is vivid and the pacing is steady, and like a novel it takes awhile to warm to the plot. But by a third of the way in I was hooked.

Johnston is a deliberate writer, choosing words and images with care. His characters are soundly developed with just enough ambiguity to keep you guessing as to their drives and motives.

As for the suspense, it definitely simmers but doesn't quite boil over, in my opinion, and ultimately the mystery surrounding the Castle of Endless Woe isn't fully explained. Not all loose ends need to be tied up, but I was expecting a bit more revelation as to the evil residing in the haunted manor. However, if you enjoy storylines with an episodic feel to them, this long short story will provide some engaging entertainment while leaving you wanting more.

(Note: I downloaded a free promotional version of this story. It's now 99 cents at Amazon, which is not a bad deal for an afternoon of reading pleasure.)
Posted by Lyn at Sunday, November 20, 2011