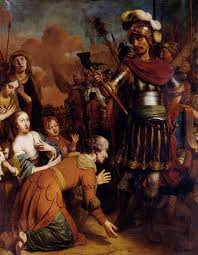 This post is an essay on Coriolanus by Williams Shakespeare - not the new movie starring Ralph Fiennes. Although I do want to see the movie.

The original play from the early 1600s is a political drama centering on the heroic life and tragic end of General Caius Marcius. The play is set primarily in Rome during the 5th century B.C. following the overthrow of the monarchy and the establishment of the republic. General Marcius is given the honorific “Coriolanus” after an epic battle against the Volscian city of Corioli in which he defeats the enemy almost single-handedly.

Such an example of extreme valor is worthy of epic recognition, and indeed Coriolanus is an epic hero; he’s proud, arrogant, and condescending, with little patience for the common person or even his fellow soldier. However, the mythic age of heroism is quickly coming to an end and Coriolanus finds himself out of place in the newly formed Roman republic.

One question this play poses, then, is: can a fundamentally anti-social hero survive the demands of the body politic? In other words, is there a place in modern society for a classic hero? By examining the life of Coriolanus, we’ll discover that the answer in most cases is no. Assuming the mantle of champion practically necessitates failure as a politician. Because this is generally true, the drama ends in tragedy due to Coriolanus’s inability to be anything other than what he was born to be – an epic hero. 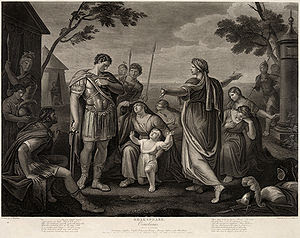 Although military success would seem to open doors to political leadership, Coriolanus is ill-equipped for such a transition. Upon his return from victory over the Volscians, the Roman Senate offers him a consulship. It is even assumed (as the dialog between the two officers in the second act demonstrates) that Coriolanus will be accepted by the populace as a consul despite the wide-spread perception that he “loves not the common people” (2.2.6).

Of course, one needn’t love commoners to be successful, but one must at least appear to care for them, for “there hath been many great men that have flattered the people, who ne’re loved them” (2.2.7-9). But Coriolanus is no flatterer. One reason, then, for his failure to transition from military service to politic leadership is the very nature of politics itself. In order to be a successful politician one must win the approval of the masses by giving them what they want.

People want a hero they can “own” – that is, approve of. However, the nature of the classic hero is such that the hero neither cares for nor seeks the approval of others. When requested by the Senators to show the crowd the wounds he obtained in battle so as to win their sympathy, Coriolanus responds, “I had rather have my wounds to heal again than hear say how I got them” (2.2.70,71).

Coriolanus will not play act simply to win the hearts of the general public. He tells Menenius, “It is a part that I shall blush in acting” (2.2.145,146). Later, even when his mother, Volumnia, pleads with him to placate the Roman citizens he has antagonized, Coriolanus responds, “Would you have me false to my nature? Rather say I play the man I am” (3.2.14-16).

Throughout the play, Shakespeare highlights this tension between Coriolanus (who is being wooed by and represents the patricians) and the plebeians, and indeed his tension with all of society. Just as Coriolanus despises others, the people express their disdain for him, for as one citizen states, “he’s a very dog to the commonality” (1.1.28). Yet this conflict of personalities is but a symptom of some deeper theme within the play. Shakespeare’s Coriolanus is not simply about class conflict, although that theme is expressed in the opening scene, for example, by the aristocracy’s monopoly on setting the price of grain. The drama embraces a broader perspective regarding a hero’s place in society.

For instance, Shakespeare relies on character development, or lack thereof, to emphasize this point. In contrast to other tragic heroes (e.g., Hamlet and Lear), the playwright paints a fairly flat portrait of Coriolanus. This appears to be a device and not a shortcoming of the dramatist’s ability to develop a character. This play’s hero is intentionally portrayed as a two-dimensional figure who knows only victory or defeat and is therefore out of place in the three-dimensional world of politics, plebeians, and patricians. Again, this reiterates the truth that a classic champion has no place in modern society and will eventually be banished from it.

Later in the play, when Coriolanus is banished from Rome he reacts violently, but not because his bid for consul was rejected by the people. He has no use for politics. Rather, it is because his fellow Romans reject him for who he is; they do not want an ancient hero like the Greek Achilles whom they cannot own or control. And since Coriolanus cannot but help “play the man” he is, he must depart from their presence. But it is enough that Coriolanus knows his own worth as a man; and he acts instinctively with noble, and therefore not political, intentions.

In fact, all of Rome recognizes his nobility, they just can’t accept it. Menenius, although a friend of Coriolanus, speaks for the people and greets him upon his entrance in Act 1, “Hail, noble Marcius!” (1.1.164). Even the two antagonists, Sicinius and Brutus, acknowledge his elevated status and proclaim, despite their sarcasm, that “he has no equal” (1.1.254).

This revelation that Coriolanus “has no equal” is critical in understanding why he has no place in society. He is something “other” and is thus disruptive to the political order of the day. Shakespeare subtly hints at this by regularly referring to Coriolanus in non-human terms. For example, General Cominus when recalling our hero’s military prowess, speaks of his friend’s “Amazonian chin” (2.2.92) and describes him as “a thing of blood” (2.2.110) on the battlefield. The audience, then, is given the impression that Coriolanus is god-like in his abilities.

In fact, Coriolanus recognizes no equal to himself except that of the enemy, Tullus Aufidius, whom he refers to in animal terms. “They have a leader,” Coriolanus says of the general of the Volscian army, who “is a lion that I am proud to hunt” (1.1.229-237). And when they meet, Aufidius, although flattering him, nevertheless recognizes Coriolanus, not as a mere human hero, but something approaching the Roman god Mars (4.5.122).

So, too, do Menenius and Cominius refer to Coriolanus when they tell Sicinius and Brutus that they have unleashed the general’s wrath on Rome by manipulating his banishment. Coriolanus has joined with the Volscians and is marching against Rome in retaliation of their rejection of him. “He is their god,” Cominius states. “He leads them like a thing made by some other deity than nature” (4.6.91,92). Like Hercules (4.6.100), Coriolanus is larger than life and has “grown from man to dragon” (5.4.13). Menenius concludes that Coriolanus lacks nothing that a god has “but eternity and a heaven to throne in” (5.4.25).

It is because Coriolanus is this kind of hero that he must be purged from society. Like the killjoys in Shakespeare’s festive comedies, Coriolanus serves as a kind of ideal which, since it cannot be attained, must be eliminated in order for society to return to balance. An epic hero disrupts that natural political order of give and take, compromise and negotiation. Coriolanus, who sees life only in stark terms of victory or defeat, cannot function effectively in a society that depends on degrees of success and failure.

Even Aufidius, the closest representation of Coriolanus’s epic heroism, has a political streak and so resorts to conspiracy to kill the hero. Unable to match him on the battlefield, Aufidius (representing the merging of military and political might of society) is the tool whereby Coriolanus is killed and thus eliminated from society. The tragedy of this drama is that this epic hero, reminiscent of the classical gods and demigods, could not find a place in the modern world.

(Note: This essay was written for a college lit class and for which I received an A. But if you plagiarize, I cannot be held responsible for the grade you receive. Write your own dang paper.)
Posted by Lyn at Saturday, December 03, 2011