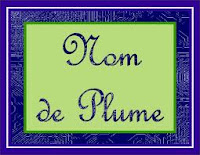 The reason for a nom de plume in this particular case is two-fold. First, my current project (called WORM, see the WIP bar to the right) is such a departure from my light spec fic style that I feel the need to delineate between the two "writers." Deep down it's me (the philosophical and theological moorings are the same) but how I express myself artistically in this case will be much different. So different, in fact, those who know me might be shocked with the finished work.

Which leads to the second reason for me choosing a pen name. I'm concerned, a bit, as to what others might think. It's not that I'm ashamed of the project, but it is, let's say, for mature audiences only. As I mentioned on Tuesday, this serial novella (more on this below) contains violence, elements of abuse, foul language, and sexual situations. And, quite frankly, some Christians won't like it. There, I said it.

What sparked this line of thought was that a friend asked me awhile back if I was ever tempted to write something that wasn't, well, appropriate. I took that to mean erotica, and no I'm not interested. But it got me thinking that many religious readers make certain assumptions as to what qualifies as, well, appropriate. I don't think my current WIP would qualify.

But, now that I've talked it out (or blogged it out) I guess all I can really do is follow the vision I have for this story and let it stand (or fall) on its own merit. So here's what I'm thinking. Let me tell you about this project and once it's "ready for press" we'll consider revealing under whose name I've penned it. Fair enough?

Worm is the title character of four interrelated novellas (about 15k to 20k words each) that tells his story from his struggles as a high school drop out to...well, that's what readers will find out. Here's the blurb.

William Randall Monro, Worm to everyone who knows him, has tried to stand up for himself his whole life...and has failed miserably. Bullied and abused since first grade, 17 year old Worm has just about had it. When his mother's latest boyfriend crosses the line, Worm takes matters into his own hands, for better or worse. But mostly for worse.

I'll tighten that up but that should give you a taste of where we're headed. And if the finished work doesn't meet some readers' expectations then what can I do? What can you do, right? Let's just see what happens.
Posted by Lyn at Friday, February 03, 2012