The Rise of Fan Fiction

Of course, fan fic is nothing new (The Gospel of Thomas, anyone?) but self-publishing has brought another dimension to the discussion: People are getting paid for writing it! Think Fifty Shades and all that.

But, on the other hand, this isn't anything new, either. If you've enjoyed any of the recent Sherlock Holmes iterations (Robert Downey, Jr., Benedict Cumberbatch, Johnny Lee Miller), you've partaken of the feast. Some lucky fan got to write those screenplays.

In fact, any Star Trek or Star Wars novel is essentially fan fiction. The only difference is that the publisher and owner of those franchises has invited only certain fans like Dean Wesley Smith, Alan Dean Foster, and Timothy Zahn (to name but a few) to write those stories. I'm not begrudging them. It's a great gig.

And now the gig is opening up. At least in one particular franchise. Hugh Howey's Wool is a NY Times Bestseller - a SF novel that has grown from a self-published novella just a few years ago into a megahit, traditionally published book...with a twist! Howey retained the electronic rights for his books and, this is where the fan fiction department gets some new paint, he's allowing fans to join the fun. 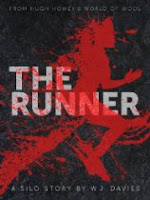 Best show you what I mean. In January, W. J. Davies published a "silo story" (for those unfamiliar with Howey's "wooliverse," post-apocalypse societies live in underground bunkers) as a short ebook called The Runner. And this with Howey's blessing. Within a few weeks it was in certain top 10 lists on Amazon.

So ... I emailed the author, struck up a friendship, received some great advice ... and just published my own silo story, The Last Prayer. I even cleared the concept with Howey himself and he emailed back: "I love it. Feel free to write and publish whatever you want." So here I am, yes, taking advantage of a new trend. Some might think it's riding coattails, but I figure each story stands or falls on its own merit. If my story sucks, it won't make any top 10 list and no one will read it.

In my quest to become a better writer, what better way to get immediate feedback from readers (via reviews if they so choose) than to jump into a fan-favorite world like Wool. Like Dean Wesley Smith has been saying since this self-pubbing revolution began, the gatekeepers have changed. Instead of relying on one person (an agent or editor) to tell you whether your story is good, go to the reading public and let them decide. In other words, you don't have to wait for an invitation to this publishing party any more. Fan fiction has opened the doors to just about everyone.