Christmas is a big event, the biggest holiday of the year. I’ll go out on a limb and say it’s even bigger than the Super Bowl. ;) At least we don’t prepare for the Big Game by playing holiday music two months in advance!

And even though the essential meaning of Christmas is consistently misunderstood or downplayed by some (or even many), it’s still an all-encompassing, world-wide occasion that touches millions – billions! – of lives in a positive way.

Despite the consumerism and so-called culture wars. Despite the alternatives that have popped up over the years like Kwanzaa or Festivus. Despite even the sadness that sometimes accompanies the holiday or even the bitter memories from a broken celebration during childhood.

Despite all those potential drawbacks, Christmas remains a superlative event, one consisting of many smaller events that speak to the joy and excitement of the season. Special happenings like work and office parties, church services and advent candles, family trips and meals together, cutting a tree and decorating the house, last minute shopping and gift exchanges, as well as driving around and enjoying your neighbor’s Christmas lights. All small events that add up to the big event we simply call Christmas. Hold on to that word ‘event’ as we look at John 1.1-5.

Before creation, before time itself began, the Word existed with God and was God. As Christians, we know this Word as Jesus Christ (made clear in John 1.14). But the word “word” in Greek in interesting. It’s logos. Has an intellectual component. Could be translated reason or rationality. We know this word by its cognates ending in -ology, like biology, theology, and punology. Okay, maybe not that last one.

Anyway, whenever I think of logos I think of an eternal mind. But the Hebrew word for “word” has a bit more texture. It connotes wisdom, not just reason. And wisdom is always knowledge in action, it’s not reason for its own sake. In fact, the Hebrew word for “word” that stands behind logos is dabar, which has more of an action orientation to it. It means occurrence, thing…event, even.

We can see God’s dabar in action throughout scripture. During the six days of creation, for example, God speaks and things pop into existence. (“Let there be light,” and there was light.) Psalm 33.6 states clearly, “By the word of the LORD were the heavens made.” God speaks and creation occurs.

Some will remember the brokerage ad: When E.F. Hutton speaks, people listen. Well, when the God of Creation speaks, something big happens! An event occurs. An intention finds fulfillment.

The “word” in Greek is a rational thing, something to be grasped.

The “word” in Hebrew is a supernatural event, something to be experienced.

John 1.1 – In the beginning (clearly harkening to Genesis 1) was the Event, the full expression of God. And now verse 14 – And that word, that event became flesh and dwelt among us.

Think about that. The Eternal Event became the Christmas Event a mere 2,000 years ago. In Christmas (and all the attendant holiday happenings) we have a small picture of eternity. A light shining in the darkness. Even though the darkness, according to John 1.5, cannot comprehend it. Or overcome it.

Now hold on to that thought for a moment as I introduce one more aspect to this story, this reflection on Christmas.

It’s in John 1.15 and concerns the person of John the Baptizer. John doesn’t show up in the traditional Christmas story. He wasn’t there at the birth. Rather, John is a herald, a voice in the wilderness announcing the adult Word Made Flesh, announcing the event of Christ’s ministry. Like all the prophets, John is pointing to the Messiah, the fulfillment of the promises of God.

John is actually the last of the Old Testament prophets, though he comes 400 years after Malachi, considered by the Jews of John’s day to be the last prophet of old. 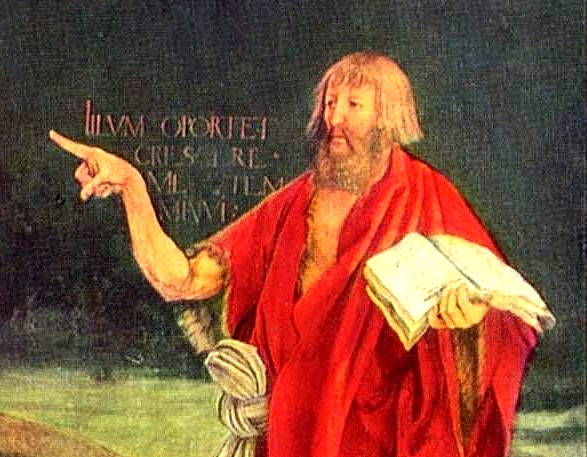 In Christian art and iconography, John is almost always pictured as the last of the prophets, the one closest to the Christ, the one pointing to the Messiah. (See the image to the right, for instance, depicting German Renaissance painter, Matthias Grünewald's Crucifixion of Christ.)

But not just the last prophet; he’s the greatest one as well.

Jesus himself acknowledges John’s greatness. In Matthew 11.10, Jesus quotes Malachi who refers to John as the Messiah’s herald: “I will send my messenger ahead of you, who will prepare your way before you.” Jesus then says of John, “Truly I tell you, among those born of women there has not risen anyone greater than John the Baptist.”

Quite the commendation. The Greatest. And we’re not talking about Mohammed Ali. John the Baptizer’s proximity (physically and chronologically) to Jesus makes him the greatest prophet of all. He not only pointed to the Messiah, but was given the opportunity to baptize him, inaugurating the ministry of the Kingdom of God!

Pretty amazing. But look at the rest of the verse, Matthew 11.10: “...yet whoever is least in the kingdom of heaven is greater than he.”

Wow! We believers, who are 2000 years this side of the Christ’s baptism, are greater than John! That’s almost unbelievable. But it’s true. Because of one difference. John pointed to the Event. We are participants in the Event. We not only experience the Christmas event, but we also know the Easter event, and the Pentecost event. We are living in the fullness of the Christ event even now.

John was a pointer, we are participants. John 1.4 – “In him (Jesus) was life, and that life was the light of humankind.” John saw the light. We have the light of Christ within us.

One more thought. Back to that mention of darkness. Jesus is the light within each believer. This is good news. John 1.5 – “The light shines in the darkness, and the darkness has not overcome it.” The King James version states that the darkness comprehended it not. Either interpretation works.

And both are quite applicable to the Christmas event we just celebrated.

As I mentioned at the start of this sermonette, there are some (many?) who just don’t “get” Christmas. They don’t know the real reason for the season. Or, if they do, they fight against it. They ignore it, downplay it, propose alternatives to it. Not every unbeliever, of course.

But the Word? The Eternal Event that became the Christmas Event? He continues to shine. He continues to overcome. Darkness may not understand it, but neither can darkness defeat it. For Jesus is the Word and the Word is from the beginning. The Word is with God and is God.

And the Word will continue to speak his way into our hearts and minds. It’s his nature to do so. For Jesus is truly the Word – the Logos, the Dabar. John pointed to this great event, we have the opportunity to participate in it. This choice, the gift of participating in this wonderful Holy-day Event, is what is offered to the world each holiday season...and always.