The Living Parable of a New Kind of King 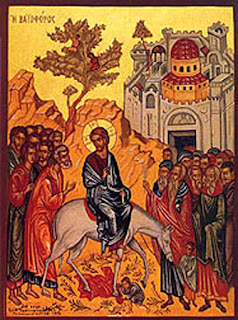 We’re coming to the close of Holy Week. For the Christian, this most sacred of weeks started with Palm Sunday. That’s when we celebrate our Lord’s triumphal entry into Jerusalem. Many of us waved our palm branches this past Sunday in honor of Jesus’s victory parade, if you will, as Messiah.

We sang “Hosanna!” which means “Save us now!” and we learned it was in fact a war cry of sorts. The people were calling out to God, echoing the words from Psalm 118.25-26, “O Yahweh, save us! (Hosanna!) O Yahweh, grant us success! Blessed is he who comes in the name of Yahweh.” Because surely the one who comes in the name of the Lord will save his people from despair.

Entering Jerusalem in this manner, accompanied by these shouts of praise and petition, was not an accident. Jesus knew exactly what he was doing. He was creating a living parable. He was acting out a message about his person and his purpose. He had something he wanted to communicate and he did it in grand style.

My brother pointed this out to me in a devotional he wrote recently for his church’s website: “Instead of just entering the city with his disciples as he had in times past, this time Jesus chose to stage a drama to make a statement. Drawing on the history of the Jewish people from the time of David, mixing in imagery from the prophets, Jesus proclaimed the he was God’s king and chosen one and ruler over his kingdom.”

A drama. An enacted parable. A teaching tool.


One of the key biblical themes he brings to the fore during this enactment of his triumphal entry can be described as a “great reversal.” It tells us a lot about his person and purpose.

Here’s the background. According to 2 Samuel chapters 15 and 16, King David flees Jerusalem in disgrace because his son Absalom has stolen the hearts of the people. Absalom has led a revolt and forced David and his cabinet to escape the city. On their way out, David is weeping profusely.

As my brother writes in his devotional, they “cover their heads with clothes…and sneak up the road to the Mount of Olives. At the summit, one of David’s followers offer them donkeys to speed them on their way, and they escape to Jericho and then to the wilderness beyond the Jordan.”

Now let’s fast forward about 1,000 years to Jesus’s journey to Jerusalem. He arrives from the wilderness beyond the Jordan, stops in Jericho and heals a blind beggar – who recognizes him as the Son of David! – then he makes his way to Bethpage, a village near the Mount of Olives.

Here he instructs his disciples to find and untie the donkey he will ride into the city. The people were watching and waiting, they sense what’s going on. They’d accompanied Jesus, the Son of David, to Jerusalem for a number of miles, after all. From before Jericho, the crowds were speaking his praises and were now at fever pitch, at this point. They took off their cloaks, cast them on the ground before him, cut palm branches and waved them in expectation. They’re ready to escort him into the city.

Jesus is following the same steps David did, only in reverse. We even read in the Gospel of Luke that Jesus stops part way down the Mount of Olives and weeps over Jerusalem.

Do you see what’s happening? The parallels between this drama and the Old Testament story of David in 2 Samuel? David the beloved King of Israel flees in disgrace. David’s Son, the beloved of the Father and King of the World, returns in triumph.

What a powerful reversal!

Matthew, the gospel writer, wants to make sure his readers connect the dots and realize that the prophecies are reaching their fulfillment in Jesus. And so he quotes Zechariah 9.9 – “Say to the Daughter of Zion, ‘See, your king comes to you, gentle and riding on a donkey.’” The people participating in this living parable understood. Jesus was taking on the mantle of a king.

Even the Pharisees understood and they were not happy about it. They told Jesus, “Teacher, rebuke your disciples.” He answered in Luke 19.40, “I tell you, if these were silent, the very stones would cry out.” Everyone realized what was going on. Creation knew it! The Messiah had come!

What the crowds didn’t understand, however, was what kind of King, what kind of Messiah, Jesus actually was. He wasn’t the military hero they were expecting. Remember, he wasn’t riding a war horse. He was riding a humble colt of a donkey.

Now we, reading this account nearly 2,000 years later, understand that Jesus’s kingdom is not of this world – as he said a number times and in a number of ways throughout his ministry. But those surrounding him were still wondering.

Except for a few.

Some of his close companions seemed to know what Jesus was really about. Close friends like Mary, Martha, and Lazarus.

“Six days before the Passover, Jesus came to Bethany, where Lazarus lived, whom Jesus had raised from the dead. Here a dinner was given in Jesus’ honor. Martha served, while Lazarus was among those reclining at the table with him. Then Mary took about a pint of pure nard, an expensive perfume; she poured it on Jesus’ feet and wiped his feet with her hair. And the house was filled with the fragrance of the perfume.

“But one of his disciples, Judas Iscariot, who was later to betray him, objected, ‘Why wasn’t this perfume sold and the money given to the poor? It was worth a year’s wages.’ He did not say this because he cared about the poor but because he was a thief; as keeper of the money bag, he used to help himself to what was put into it.

“‘Leave her alone,’ Jesus replied. ‘It was intended that she should save this perfume for the day of my burial….’”

The day of his burial.

What kind of king is this who speaks of his death, his burial? Kings speak of victory. Of sweeping away their enemies. Of ‘making Jerusalem great again.’

Mary seemed to understand. It was a lesson she’d learned perhaps just a few weeks previous. When her brother Lazarus had died, she was the one who fell at Jesus’s feet and said, “Lord, if you had been here, my brother would not have died.” (Luke 11.32)

But then she witnessed a miracle of reversal. Her Lord called Lazarus out from the tomb and presented him alive. Oh, what joy must have ensued. What gratitude must have flowed from friends and family. All eyes were on Jesus, the giver of life. That was probably why Jesus was in Bethany during that last week of his life. The feast was in his honor…for raising Lazarus from the dead. He was celebrating with the village the return of a dear friend and brother.

Oh yes, Mary was familiar with great reversals. And somehow, her anointing of Jesus’s feet with perfumed oil, declared her understanding of just what kind of Messiah Jesus truly was. That’s what the word Messiah means, by the way, the anointed one.

King David was anointed as well – by the prophet Samuel to be King of Israel. But David lost it all. Jesus, anointed by God and recognized by Mary in the anointing of oil, didn’t lose it all but gave it all, and in the greatest reversal of history, gained the whole world for the glory of the Father.

Jesus’s public ministry begins and ends in celebration. His first miracle is at the wedding feast at Cana where he turns water into wine, foreshadowing the wine of the new covenant. Now we see him at another feast celebrating Lazarus’s return from the dead, one of our Lord’s last miracles. And the anointing of oil by Mary foreshadows his death and burial.

“Leave her alone,” Jesus replied. “It was intended that she should save this perfume for the day of my burial….”

So Christ’s triumphal entry as King – understood properly within the context of his whole ministry – points to a different kind of Messiah, doesn’t it? A servant king, really. A Messiah who truly is for the people.

As he has demonstrated from the very beginning, his kingdom, his gospel, is one of peace and healing. And love and mercy. And grace. And resurrection life.

A living parable of a new kind of King, one who moves from death to life.

The greatest reversal in the history of the world.