Saw Dune. Enjoyed it. The cast was solid, the storyline was faithful to the novel, the cinematography was superb. The soundtrack was muddled.

Pretty much what everyone else is saying. Good, great even, but not perfect. 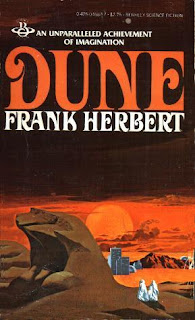 I’d read the original six novels in high school and college. Might have read the first one in junior high. (Crazy to think I could sit still long enough during jr hi, but I managed LotR, Dragonriders of Pern, Star Wars, even Jaws during time. Heh, kids with books!)

So I reread Dune last year in anticipation of the movie and was pleasantly surprised it held up to my nostalgia. It is a classic, deservedly so.

Definitely a different style of storytelling than what is so prevalent today. Omniscient POV. Difficult to pull off and Herbert was a master. Plus, the epigraphs hinted at or downright ‘spoiled’ the coming events. Yet they worked.

You’d think knowing Yueh’s betrayal ahead of time would let the air out, but in fact, it simply raised the tension in the novel. Something that couldn’t be replicated in the film, unfortunately.

I know some have seen the movie without reading the books and they said they could follow the plot. I maintain, however, that if you were not familiar with the novel, you missed a lot of the subtleties of the story – the dream/vision sequences, for example, and their implication for the fate of the Empire.

Still, both book and film were wonderful, but for me the book was probably better. I’m definitely up for rereading all of the original six installments:

Now that I’m older, though, my attention span is waning. So it may take a while to get through them. As for a Lord of the Rings reread? Not sure I can pay attention long enough these days!