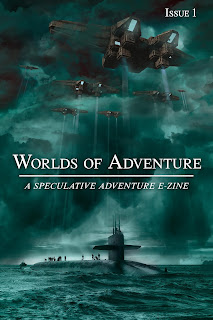 This is an interesting experiment - and I wish the publisher, Allison Tebo, well. She's introducing a quarterly e-zine called Worlds of Adventure, where she and her two sisters (all writing under pseudonyms) can share their unique worlds of, well, adventure.

Tebo is a Christian writer of magical stories full of excitement, grit, and a few laughs as well. She seems to gravitate toward romantic comedy retellings of popular fairy tales; and Issue 1 is a nice sampling of this genre.

Her indie publishing venture is T Spec Fiction and this quarterly e-zine contains clean, speculative fiction for YA and MG readers (though adults will enjoy the stories as I did, I'm sure).

I was given a free copy of the zine so that I might share a review here and on Goodreads and Amazon. I'll probably post it on my SF/F review blog as well, Residential Aliens.

Here are my thoughts on each of the 7 stories in this issue.

* Rendezvous - a cute vignette (a slice of a larger story) featuring a defector's accidental escape from custody. The writing is wry and succinct. Not a bad bit of flash fiction. Has a steampunk feel to it.

* One Last Shot - also a short scene (not a full blown story), featuring another escape but this time done with ingenuity and bravery against a robot guard. Would like to know more about this space opera world; how the protag got involved with her new alien friend whom she helped break out of prison.

* The Queen’s Cure – a bit longish ‘fantasy world vs modern machines’ story, where the traitor to the kingdom advances his science against the realm’s reliance on the Fae. Quite tragic and thematic. The queen employs a long forgotten remedy to save her people, but at what cost?

* Treachery Aboard The Nautilus – probably my favorite story, a pastiche of what happens right after Nemo’s victory over the giant squid in 20,000 Leagues Under the Sea. Imaginative, well written, with a nice resolution. A new story in a familiar world is a risk for a writer, but this one works.

* Seven Strong – A fairytale reimagining of Snow White and the Seven Dwarfs in a steam punk, robotic, business conglomerate world. Had a hard time getting into this one, but maybe because I never particularly cared for the original story and the re-told setting was just too unusual a mash-up for me.

* Night Raid On The Zone, Part 1 – I have to admit I skimmed this one knowing it was the initial installment of a serial novel and is to be continued in future episodes. I usually want to read a novel as is and not one chapter at a time over time. The premise looked interesting, though.

* The Trent-Featherstone Journals: Episode 1 – This, too, is a serial but this first episode is intriguing. “Victorian ladies fending off hungry dinosaurs on the planet Venus” is how another reviewer put it. I like it. Steam punk, sci-fi, fantastic adventure. If this ever develops into a full novel, I’d probably want to read the whole thing.

So, five stories and two continuing stories make up this first issue. Great concept, overall. Clean and mostly wholesome (PG’ish) with some tragedy, tension, and thought-provoking themes. If you want to support indie projects, this is a good one to look into.

~*~
"Tip a buck, get a book."
(via PayPal.Me - an e-book from Tule Fog Press.)
This blog is reader supported. Thank you for your support!